"We are determined to complete this mission with or without a cease-fire," Netanyahu said in public remarks at the start of a cabinet meeting in Tel Aviv. ... 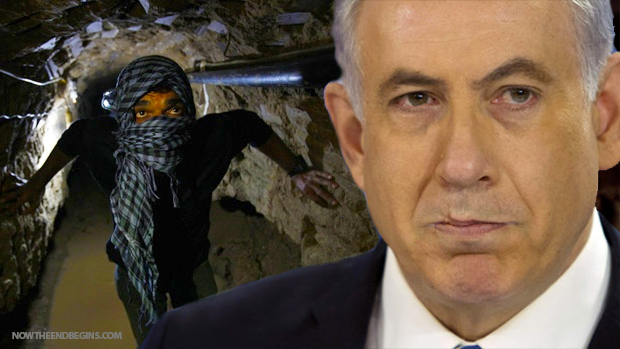 Ceasefire or not, the mission is to destroy the tunnels

“The LORD shall send the rod of thy strength out of Zion: rule thou in the midst of thine enemies.” Psalm 110:2

Prime Minister Benjamin Netanyahu said on Thursday that Israel was determined, regardless of ceasefire efforts, to complete the destruction of tunnels that Palestinian militants have built under the Gaza-Israel border.

“We are determined to complete this mission with or without a cease-fire,” Netanyahu said in public remarks at the start of a cabinet meeting in Tel Aviv. “I won’t agree to any proposal that will not enable the Israeli military to complete this important task for the sake of Israel’s security.”

“At this time, the entire nation expects government ministers to rally behind the goal. In the days when our soldiers are fighting the enemy, we must be united and strong.”

“Hamas’ capabilities would have enabled it to abduct and murder civilians and IDF soldiers while simultaneously attacking from the tunnels penetrating our territory,” Netanyahu said. “We are destroying that capability now. There are no 100 percent guarantees, just as the Iron Dome does not give a complete response, but the IDF’s operations in the field are impressive and they are continuing at full force.”

“We have so far neutralized dozens of terror tunnels and we are determined to complete this task. Therefore, I will not agree to any cease-fire that does not enable the IDF to complete this very important task. Hamas has been hit hard by both the IDF and the Shin, who are closely coordinated. We have delivered harsh blows to thousands of terror targets, rockets depots, manufacturing sites, and launching sites, and hundreds of terrorists have been killed. These achievements and the operation to neutralize the tunnels are only the first step in demilitarizing the Gaza Strip. The United States and the European Union have accepted our stance, and though it was difficult to achieve, we have done so, through hard work.”

In a pointed message to Foreign Minister Avigdor Lieberman and Economy Minister Naftali Bennett, who have spoken out against his policies over the course of the Gaza operation, Netanyahu said: “I urge you, extremists on both sides: Do not harm the special unity that exists, beware of what you’re doing. The government ministers above all are the ones who need to set an example for the entire public.”