Tensions over the Temple Mount over the last several weeks have come against rising unrest in some East Jerusalem neighborhoods, with near-daily incidents of rocks being thrown at Israeli... 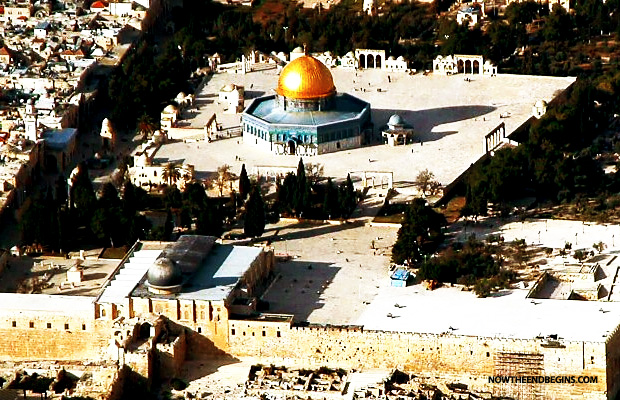 What the prophets have declared will soon come to pass

“Behold, I will make Jerusalem a cup of trembling unto all the people round about, when they shall be in the siege both against Judah and against Jerusalem.” Zechariah 12:2

In both the Old and New Testaments, the prophets have declared that in the last days, Israel would be the focus of all the world. And not just Israel in general, but Jerusalem in particular where the Temple Mount is. This is the most important spot that exists anywhere on the whole earth, according to Scripture.

The prophet Daniel says that when the “man of sin” comes, he calls him the “abomination that maketh desolate”, he will sit on the throne of the rebuilt 3rd Jewish Temple and declare himself to be God.

The prophet Zechariah says that Messiah will return to that exact same spot, and will split the Mount of Olives right down the middle.

The underpinnings of the spiritual battle that will be waged during upcoming the “time of Jacob’s trouble” have already begun, and at some point will spiral out of control. Jesus is preparing to return, and Satan is preparing for the battle of Armageddon in a vain attempt to stop Him. Scripture is right on time.

Tensions over the Temple Mount over the last several weeks have come against rising unrest in some East Jerusalem neighborhoods, with near-daily incidents of rocks being thrown at Israeli drivers and Molotov cocktail attacks. Police have bolstered their presence in an effort to crack down on violence.

The report added that Netanyahu had agreed to temporarily close the site, known to Muslims as Haram al-Sharif, to Jewish visits in the coming days, and to increase coordination with the Islamic Waqf on managing the site.

Netanyahu also agreed to change the way non-Muslims are allowed to visit the compound, according to the report.On Sunday, Netanyahu appealed for calm in Jerusalem, rebuffing calls to open the site to Jewish prayer in the wake of the shooting of an activist who lobbied for increased Jewish access there.

“I think that what is necessary now is to show restraint and to work together to calm the situation… I also ask that private initiatives be avoided as well as unbridled statements,” he said at a cabinet meeting. “We are committed to the status quo for Jews, Muslims and Christians.”

On Saturday, Netanyahu called on all Knesset members to work to calm tensions surrounding the Temple Mount, the Prime Minister’s Office said in a statement. Despite the statement, right-wing MK Moshe Feiglin from Netanyahu’s Likud party visited the site on Sunday under heavy guard.

Jewish prayer is banned in the compound, considered the religion’s holiest site. Muslims also revere the area, which houses the Dome of the Rock and the al-Aqsa Mosque, as holy.

According to the Kuwaiti report, Netanyahu’s appeals for calm were the result of Jordanian pressure, as was a statement from Palestinian Authority President Mahmoud Abbas saying Netanyahu’s words were “a step in the right direction.”