Right-wing extremists Golden Dawn won 6.9% of the vote and will have 21 seats in Greek Parliament. They want to put foreigners into concentration camps. Yes, this is really... 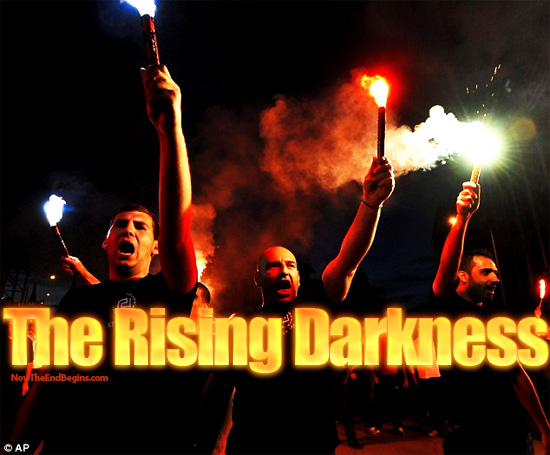 Rise of the far right: Dressed in black shirts and brandishing flares, these Golden Dawn supporters celebrate after they secured almost seven per cent of the vote
by Geoffrey Grider May 7, 2012
NOW THE END BEGINS SHARE:

A neo-Nazi party who advocate forcing immigrants into work camps and planting landmines along the border are today savouring unprecedented political success in Greece.

Rise of the far right: Dressed in black shirts and brandishing flares, these Golden Dawn supporters celebrate after they secured almost seven per cent of the vote in Greece.

Golden Dawn party will enter parliament with seven per cent of the vote after the electorate shunned the main parties who they blame for plunging the nation into austerity.

The obscure extreme-right group are one of the biggest winners in a poll which has plunged Greece into a fresh political crisis.

The party, who deny being neo-Nazis, have branded journalists ‘liars’ and warned all ‘traitors’ to run scared.

They adopt the Nazi salute and have a stylised swastika as their logo and have already made inroads into local government – in areas of Athens where there are large numbers of immigrants.

At the last general election they took just 0.23 per cent of the vote.

But the group has cultivated a benevolent image in some Athens’ neighbourhoods by dropping off food to needy families and escorting elderly residents to cash machines.

This time they easily passed the 3 per cent threshold to win their first seats in Parliament.

Flanked by burly, muscular men in tight black t-shirts, Golden Dawn leader Nikolaos Mihaloliakos marched down the street in Athens yelling ‘liars’ and ‘You must be ashamed for all your lies!’ at foreign journalists following him.

‘Greece is only the beginning,’ he shouted at them. When asked what that meant, he said: ‘You know very well’, wagging a finger at the television camera.

As they strode to the hotel, his supporters began chanting ‘Greece belongs to Greeks’ and ‘Foreigners get out of Greece’. When asked what his first action in parliament would be, Mihaloliakos said: ‘All the illegal immigration out! Out of my country, out of my home!’ Asked how he planned to carry that out, he angrily said: ‘Use your imagination’. source – Daily Mail