NASA's LDSD flying saucer-shaped test vehicle is ready to take to the skies from the U.S. Navy's Pacific Missile Range Facility in Kauai, Hawaii, for its first engineering shakeout... 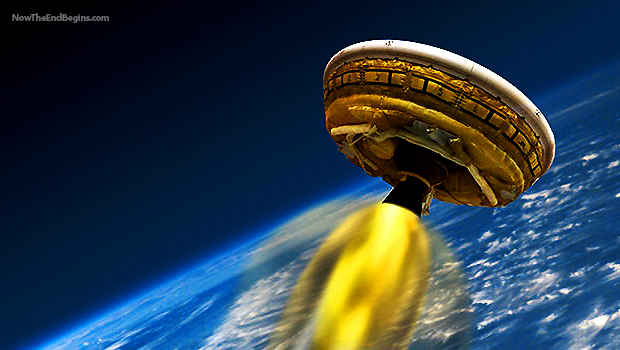 NASA – Depending on what you believe or don’t believe, the US Military recovered a crashed UFO space craft in Roswell, New Mexico on July 7, 1947. Or, maybe it didn’t. But something happened. Something of such a serious nature that the Army rounded up all the pieces of whatever it was that crashed, then made it all disappear like it never existed. They gave the “official account” of what happened, and then changed that story several times. And that’s after putting out a press release claiming that a flying disk had crashed in Roswell in July of 1947.

NASA’s flying saucer-shaped test vehicle is ready to take to the skies from the U.S. Navy’s Pacific Missile Range Facility in Kauai, Hawaii, for its first engineering shakeout flight.

Whatever it was that happened there that night may never fully be known, but we know this much. The US military’s ultra-high tech, beyond super-secret development and design complex – Area 51 – is quite real and was created in the aftermath of the UFO crash on July 7th.

So why do we tell you all this? Because it just so happens that NASA’s latest space test vehicle – the Low Density Supersonic Decelerator –  is shaped exactly like the same type of flying saucer that crashed in Roswell.

So, depending on what you believe, or don’t believe, the United States government is now creating flying saucers. Or maybe it’s just an amazing coincidence that NASA’s latest space vehicle looks, acts and moves like a UFO.  NASA says the first test launch will be any day now.

The truth is out there…