Are Voodoo And Witchcraft To Blame For The Unprecedented Rise Of Murder, Rapes And Assaults Happening Now In The Dominican Republic?

“There is something … something dirty at the bottom of all of this,” Nieves told news station WTXF. “She was 51 years of age, relatively healthy, no reason for her to go on vacation and just die so suddenly.” “It’s a complete fabrication that you could have as many people and they all have the same cookie-cutter outcome. It’s impossible,” Nieves told WCAU. A rep for the resort didn’t immediately respond to a request for comment.

“There is something … something dirty at the bottom of all of this,” Nieves told news station WTXF. “She was 51 years of age, relatively healthy, no reason for her to go on vacation and just die so suddenly.”

Something strange is going on in the once-peaceful tropical country of the Dominican Republic. Known for its lush sandy beaches and gorgeous ocean vistas, a sinister spirit has risen up there and bad things are happening. Instagram influencers are being assaulted, Red Sox star David Ortiz was shot and nearly killed, tourists are visiting top-dollar resorts and dying mysterious deaths. What on earth is happening there? For starters, take a look at this image I found when I googled the term ‘voodoo in dominican republic’

The Dominican Republic is the oldest European settlement which neighbors Haiti. The two were once one called Hispaniola before Haiti declared its independence in 1804. Although the two were once one, they resent one another. Though they went their separate ways, they still share some of the same practices and beliefs. The main religion in the Dominican Republic is Roman Catholicism. The dominant religion in Haiti is Voodoo. A large number of Dominicans practice voodoo, or “Las 21 Divisiones” which is Dominican voodoo. Dominicans do not identify their African roots, so they have created their own voodoo which is accepted of those who practice it and viewed different from Haitians’ voodoo practices. 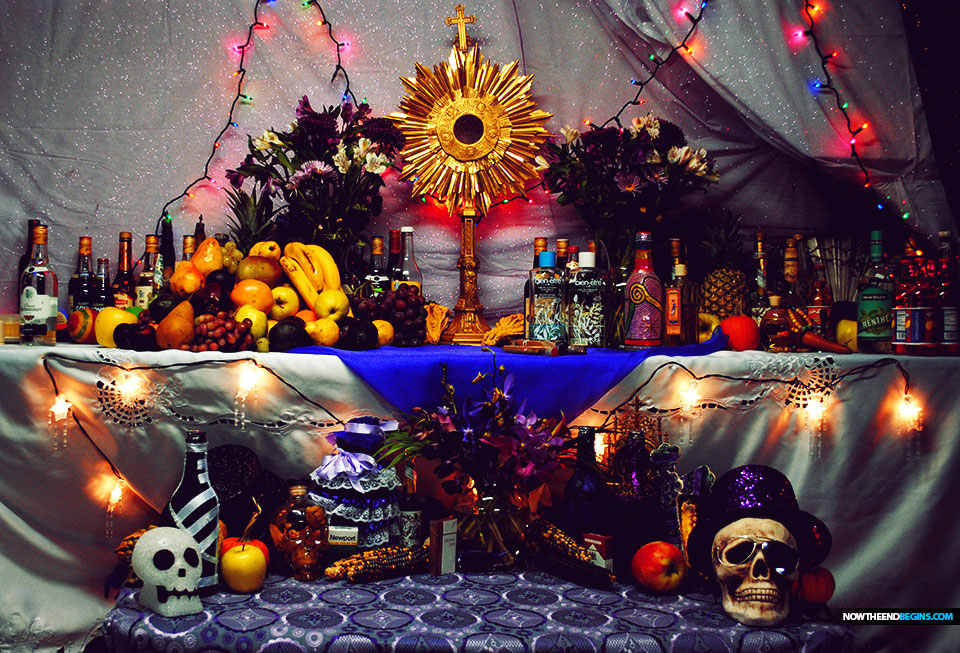 In Haiti, some Catholics combine aspects of Catholicism with aspects of Vodou

As you can see, in both Haiti and the in the DR, voodoo is practiced alongside Roman Catholicism as the two have much in common. In the Roman Catholic mass, the eucharist is stored in a container that is ironically called the ‘monstrance’, as in monster. The Catholic priest recites a Latin prayer as an incantation with which he believes will “pull Jesus down’ from Heaven and sacrifice Him all over again. This is where we get the term ‘hocus pocus‘ from. This pagan practice of transubstantiation is right in line with the type of voodoo practiced on Haiti and in the Dominican Republic. In the above photo, you see a Haitian voodoo ceremony being prepared and what do you see right in the middle of everything? A Roman Catholic monstrance. Hmm.

When a spirit rises in a land the way it is right now in the Dominican Republic. you need to stay far away from there. I have a good friend named Craig, and he went to Haiti a few years ago on missionary work, but when he came back his head was spinning from the level of witchcraft and voodoo that went on there. He was in no way prepared for what he saw there, but the Lord kept him safe. People who don’t know the Lord and who aren’t saved are at grave risk in places like the Dominican Republic right now. The people who survived their trips to the DR nearly all have said that there is ‘something strange going on’, they just don’t know what it is. Now you know.

FROM THE NY POST: The family of a Pennsylvania bride-to-be who died under circumstances similar to those of guests at the Grand Bahía Príncipe resort in the Dominican Republic says it’s “impossible” that her sudden death at a hotel owned by the same company isn’t related.

Yvette Monique Sport, of Glenside, Pa., died from a heart attack in June 2018 during a trip with her fiancé to the Bahía Príncipe in Punta Cana, news station WCAU reported.

“There is something … something dirty at the bottom of all of this,” Nieves told news station WTXF. “She was 51 years of age, relatively healthy, no reason for her to go on vacation and just die so suddenly.”

Sport had a drink at the minibar in her hotel room, took a shower and “wanted to retire for the evening,” according to her sister. When Sport’s fiancé tried to wake her, he realized she was unresponsive, according to WCAU. “He tried to nudge her again and there was no sound and then she was gone,” Nieves said.

Sport’s situation is strikingly similar to the case last month of 41-year-old Miranda Schaup-Werner of Allentown, Pa. Schaup-Werner also drank from the minibar in her room at the Luxury Bahia Principe Bouganville resort. Her family said she succumbed to a heart attack hours later on May 25 in the hotel.

Five days later, an engaged couple from Maryland died during their visit to the same resort, officials said. Nathaniel Holmes, 63, and Cynthia Ann Day, 49, were found dead in their room from pulmonary edema and respiratory failure. Nieves said she wants to get in touch with the families of the victims to put pressure on the resort chain to investigate.

“It’s a complete fabrication that you could have as many people and they all have the same cookie-cutter outcome. It’s impossible,” Nieves told WCAU. A rep for the resort didn’t immediately respond to a request for comment. READ MORE

US authorities are scrambling to get to the bottom of a rash of deaths of US tourists in the Dominican Republic, with the number of reported fatalities over the past year now rising to six.

FROM YAHOO NEWS: Three people whose deaths have been confirmed all arrived on May 25 in San Pedro de Macoris, a seaside resort in the south of the Caribbean country, Dominican authorities said. Miranda Schaup-Werner, 41, booked a room with her husband at the Luxury Bahia Principe Bouganville hotel. She lost consciousness on the day of her arrival after going out on the balcony. She could not be revived by her husband or hotel medical staff.

Cynthia Day, 49, and Edward Holmes, 63, stayed in an adjacent hotel, Grand Bahia Principe La Romana. The couple from Maryland was found dead on May 30 in their room by hotel staff.

According to the Dominican Prosecutor’s Office, the three victims died of respiratory failure and pulmonary edema. Schaup-Werner also had a heart attack.

News of the deaths has drawn attention to earlier deaths of American tourists at island resorts that received no publicity at the time — some now suspect — may have been part of a pattern. READ MORE

Instagram influencer painted rosy picture of DR despite being groped, nearly kidnapped, she now is warning others not to go

FROM THE NY POST: An Instagram influencer known for traveling around the world with her husband said she was nearly abducted and sexually assaulted during their trip to the Dominican Republic.

Cora Smith — who, with her hubby, Jay, runs the Instagram account The Great Escape Blog, which has 26,000 followers — said she felt compelled to paint a rosy picture online of their three-month jaunt to the DR in 2018.

Walking up to the altar inside Iglesia de San Francisco, the beauty was striking. We spent a while inside, admiring the different pieces throughout the interior before heading back out into Quito to get some more delicious fresh fruit and grilled meat 😀 . . . #ecuador #ecuador🇪🇨 #🇪🇨 #exploreecuador #ecuadorprimero #ecuadortravel_ig #ecuadorturistico #ecuadorisallyouneed #ecuadorian #turismoecuador #discoverecuador #ecuadortravel #travelecuador #quitoecuador #quito #travelblog #travelblogger #speechlessplaces #beautifulchurch

“You feel this obligation to be honest, but a fear of rejection if you are,” Smith said in an interview with Business Insider. “I didn’t tell my story, and I think it’s out of fear.”

She first shared her harrowing experience in a blog post last year — but said she wanted to make it more publicly known following the recent spate of deaths in the DR and news that a Delaware mom was brutally attacked at a resort there. Boston Red Sox legend David Ortiz was also recently shot while sitting at a bar in Santo Domingo.

“It’s not a safe country, and it’s not just the five-star resorts,” Smith said. “I feel like I can’t sit here and listen to the prime minister and say, ‘Our country is safe,’ because it’s not safe.” READ MORE