Maj. Nidal Hasan, the Army psychiatrist whose shooting rampage at Ft. Hood left 13 people dead, was convicted today by a jury of army officers, opening the door to... 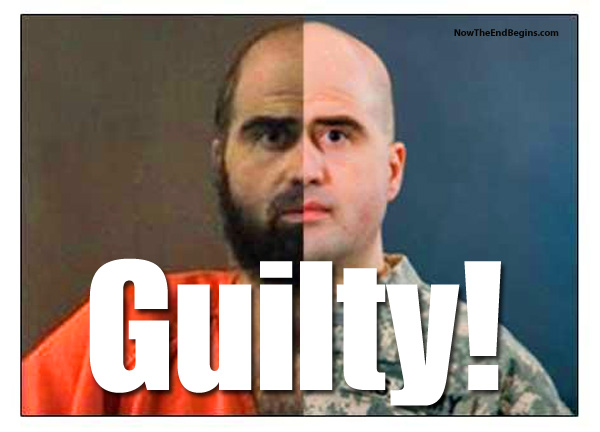 Maj. Nidal Hasan, the Army psychiatrist whose shooting rampage at Ft. Hood left 13 people dead, was convicted today by a jury of army officers, opening the door to a possible death sentence.

Hasan was found guilty on all counts, including 13 charges of premeditated murder and 32 counts of attempted murder.

Hasan, 42, a Muslim American who described himself as a “mujahedeen,” or Muslim holy warrior, never denied shooting the unarmed soldiers and bystanders and initially attempted to plead guilty. The military, however, insisted he go to trial in order to be eligible for the death penalty.

Hasan had no visible reaction to the verdict, according to an Associated Press reporter in the courtroom.

The sentencing phase will begin Monday. All 13 jurors must vote for execution, or he will spend the rest of his life in prison. The military spent four years and $5 million to ensure Hasan would be convicted and be eligible for a death sentence.

Executions in the military are rare. All death sentences are subject to automatic appeal, a process that can take decades. There are currently five inmates on the military’s death row, but an active serviceman has not been executed since 1961.

Hasan, who defended himself, made the government’s prosecution of him so easy his own standby attorneys accused of him of cooperating to get himself executed.

Over the course of the three week trial, the government called 89 witnesses, none of whom the major cross-examined. He called none of his own witnesses and immediately rested his case when he had the chance to defend himself.

“It wasn’t done under the heat of sudden passion,” Hasan said before jurors began deliberating. “There was adequate provocation — that these were deploying soldiers that were going to engage in an illegal war.”

Hasan admitted to entering a medical building at the base on Nov. 5, 2009, and opening fire on soldiers preparing for deployment to Iraq and Afghanistan. He yelled “Allahu akbar,” Arabic for “God is great” before training a pistol with a laser sight on his victims, 12 of whom were soldiers.

Hasan was shot in the back when police officers responded. As a result, he is paralyzed and wheelchair bound. source – Yahoo News