Muslim Riots Spread To Yemen, No End In Sight

Yemen's President Ali Abdullah Saleh will not seek re-election once his current term ends in 2013, he said Wednesday, after more than three decades in office. He won't install his... 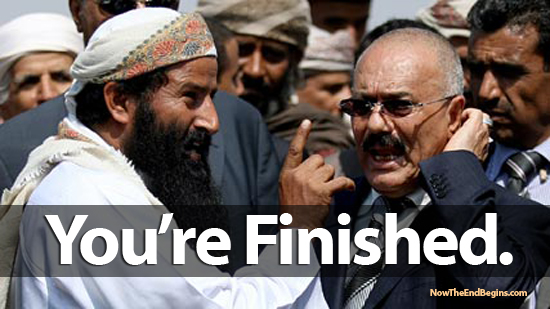 As we have been telling you all along, these riots that are spreading across the Middle East is a carefully-orchestrated plot by the Muslim Brotherhood to shore up their power base ahead of an attempt to invade and attack Israel. These riots are not about “freedom” in any sense of the word, it is about power, it is about Sharia, and mostly it as about the never ending hatred the Muslims have for God’s people, the Jews.

In Yemen, Saleh had called an emergency parliamentary meeting ahead of a "day of rage" protests scheduled for Thursday.

(CNN) — Yemen’s President Ali Abdullah Saleh will not seek re-election once his current term ends in 2013, he said Wednesday, after more than three decades in office.

He won’t install his son to replace him, he said. He also has asked his political opponents “to re-engage in dialogue in hopes of reaching a sustainable and reconcilable political agreement,” the Yemeni government said. Saleh made the announcement as unprecedented protests sweep across North Africa and the Middle East. The demonstrations have forced Tunisia’s president from office, and they prompted Egyptian President Hosni Mubarak to say Tuesday he would not run for re-election this year.

King Abdullah of Jordan, meanwhile, has sacked his government and appointed a new prime minister in the face of protests there.

In Yemen, Saleh had called an emergency parliamentary meeting ahead of a “day of rage” protests scheduled for Thursday. The protests — which have also caught on to various extents in Algeria and Sudan — have proved to be “a real watershed event for the Arab world,” said Blake Hounshell, managing editor of Foreign Policy magazine. “It’s really unprecedented.”