Muslim unrest reached Australia, where hundreds of demonstrators clashed Saturday with police outside the U.S. Consulate in Sydney.... 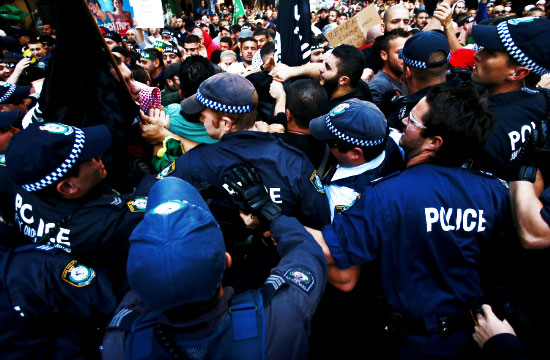 Protesters clash with police on a street in Sydney's central business district on Saturday, September 15, as part of widespread anger over a film ridiculing Islam's Prophet Mohammed.
by Geoffrey Grider September 15, 2012
NOW THE END BEGINS SHARE:

(CNN) — The fury over an anti-Islam film that targeted American diplomatic missions has spread to a number of other Western facilities in the Muslim world, raising the specter Saturday of a widening protest.

Protesters clash with police on a street in Sydney’s central business district on Saturday, September 15, as part of widespread anger over a film ridiculing Islam’s Prophet Mohammed.

Attacks on German and British embassies in Sudan, the ransacking of an American school in Tunisia, a fire at a U.S.-based fast-food restaurant in Lebanon and attacks against multi-national peacekeepers in Egypt’s Sinai Peninsula were among the latest targets in protests that turned violent.

The unrest reached Australia, where hundreds of demonstrators clashed Saturday with police outside the U.S. Consulate in Sydney.

Top Western diplomats warned leaders in countries where the unrest has been most pronounced to ensure the protection of its missions and its people.

“I am following the unfolding events with grave concern and call on national authorities in all countries concerned to swiftly ensure the security of diplomatic mission and protect diplomatic staff,” Catherine Ashton, the European Union foreign affairs chief, said in a statement.

“It is vitally important leaders across the affected regions should call immediately for peace and restraint.”

From Morocco to Malaysia, thousands of Muslims have taken to the streets in recent days — with sometimes deadly results — over the release of a 14-minute trailer, privately produced in the United States, that mocks the Prophet Mohammed as a womanizer, child molester and ruthless killer.

Despite the firm condemnation by U.S. government officials, some in the Muslim world — especially those raised in regimes in which the government must authorize any film production — cannot accept that a movie like “Innocence of Muslims” can be produced without being sanctioned by Washington, said Council of Foreign Relations scholar Ed Husain.

“They’re projecting … their experience, their understanding (that) somehow the U.S. government is responsible for the actions of a right-wing fellow,” said Husain, a senior fellow at the New York think thank. source – CNN