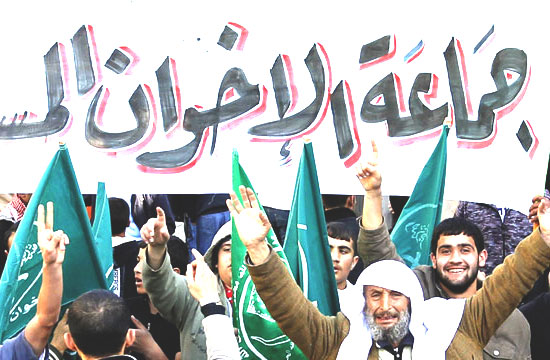 Arab hate: Muslim Brotherhood rally in Cairo’s most prominent mosque Friday turned into a venomous anti-Israel protest, with attendants vowing to “one day kill all Jews.”

Some 5,000 people joined the rally, called to promote the “battle against Jerusalem’s Judaization.” The event coincided with the anniversary of the United Nation’s partition plan in 1947, which called for the establishment of a Jewish state.

Speakers at the event delivered impassioned, hateful speeches against Israel, slamming the “Zionist occupiers” and the “treacherous Jews.” Upon leaving the rally, attended were given small flags, with Egypt’s flag on one side and the Palestinian flag on the other, as well as maps of Jerusalem’s Old City detailing where “Zionists are aiming to change Jerusalem’s Muslim character.”

Propaganda material ahead of Egypt’s parliamentary elections was also handed out at the site.

Spiritual leader Dr. Ahmed al-Tayeb charged in his speech that to this day Jews everywhere in the world are seeking to prevent Islamic and Egyptian unity.

“In order to build Egypt, we must be one. Politics is insufficient. Faith in Allah is the basis for everything,” he said. “The al-Aqsa Mosque is currently under an offensive by the Jews…we shall not allow the Zionists to Judaize al-Quds (Jerusalem.) We are telling Israel and Europe that we shall not allow even one stone to be moved there.”

‘We have different mentality’

Muslim Brotherhood spokesmen, as well as Palestinian guest speakers, made explicit calls for Jihad and for liberating the whole of Palestine. Time and again, a Koran quote vowing that “one day we shall kill all the Jews” was uttered at the site. Meanwhile, businessmen in the crowd were urged to invest funds in Jerusalem in order to prevent the acquisition of land and homes by Jews.

Speaking to Ynet outside the mosque following the prayer, elementary school teacher Ala al-Din said that “all Egyptian Muslims are willing to embark on Jihad for the sake of Palestine.”

“Why is the US losing in Afghanistan? Because the other side is willing and wants to die. We have a different mentality than that of the Americans and Jews,” he said. source – YNET