The fundamentalist Muslim Brotherhood named its chief strategist and financier as a candidate for president on Saturday, a surprising reversal of an earlier pledge to stay out of the... 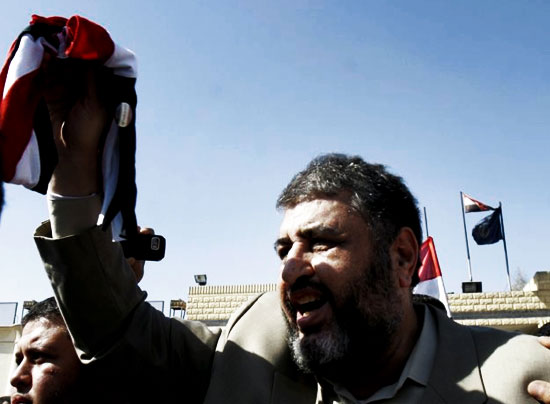 Egypt's Muslim Brotherhood on Saturday said it decided to field the movement's deputy leader and top strategist as its presidential candidate, topping off its success in legislative elections with a bid for the country's most powerful post. Top leaders of the country's most influential political group announced in a press conference that it selected Khayrat el-Shater to contest the presidential race set to start in May. (AP Photo/Mohammed Abu Zaid, File)
by Geoffrey Grider March 31, 2012
NOW THE END BEGINS SHARE:

NTEB first reported on the rise of the Muslim Brotherhood on January 27, 2011, read that story for yourself here. But to save you sometime, we predicted all of this. Every bit of it. How did we know? Because we believe the bible.

CAIRO (AP) — The fundamentalist Muslim Brotherhood named its chief strategist and financier as a candidate for president on Saturday, a surprising reversal of an earlier pledge to stay out of the race and a move that sets the group on a collision course with Egypt’s military rulers.

Egypt's Muslim Brotherhood on Saturday said it decided to field the movement's deputy leader and top strategist as its presidential candidate, topping off its success in legislative elections with a bid for the country's most powerful post. Top leaders of the country's most influential political group announced in a press conference that it selected Khayrat el-Shater to contest the presidential race set to start in May. (AP Photo/Mohammed Abu Zaid, File)

The long-outlawed Brotherhood already controls about half of the seats in parliament and had been concerned that contesting the presidency would bring a backlash from liberals and Western countries fearful of an Islamist takeover.

But in a dramatic shift that amounted to a political bombshell in Egypt, the Brotherhood nominated deputy leader Khayrat el-Shater. The multimillionaire businessman has played a key role in guiding the group through the tumultuous transition since the ouster of Hosni Mubarak in last year’s popular uprising.

Because of the Brotherhood’s success in the parliamentary vote and the reach of its grassroots political organization, the candidate it nominates or backs will be considered the frontrunner in the race for the May 23-24 vote.

And if el-Shater wins, the Brotherhood would completely dominate the political arena and could push for changes such as stricter adherence to Islamic law. A Muslim Brotherhood government could also translate into rockier relations with Israel and the United States.

The decision will likely antagonize the ruling generals, who are worried about shielding their significant business interests and other privileges from civilian oversight and are wary of too much power concentrated in the hands of a single group.

“We don’t want to reach a confrontation that affects the path of the nation,” Mohammed Morsi, top leader of the Brotherhood’s political arm said.

The decision will also widen the gap with liberals and secularists, who fear that the Brotherhood — which has largely espoused moderate rhetoric in the past year — will implement a hardline Islamist agenda once it has solidified its political position.

Already, Islamists enjoy a comfortable majority on a 100-member panel tasked with drafting a new constitution for Egypt, which has raised serious alarm among the nation’s large Christian minority and liberals.

The candidate was announced at a Cairo news conference and ended weeks of speculation and confusion within the group.

It split the Brotherhood’s Shura council, or legislative body, into two camps: one in favor of fielding a candidate and one against, fearing the repercussions, according to a Brotherhood official. He spoke on condition of anonymity because of the sensitivity of the matter.

Mahmoud Hussein, the group’s deputy leader, said the decision to run a candidate was made in the face of “attempts to abort the revolution,” after the military council refused several requests by the Brotherhood to appoint a government.

The group won close to half of parliament seats in the country’s first post-revolution elections in November. That victory was largely due to the Brotherhood’s grassroots organization.

El-Shater, who is in his early sixties, joined the Brotherhood in 1974. He has been jailed four times for a total of seven years on charges relating to his membership in the Brotherhood, which was outlawed more than 50 years ago.

He is seen as the iron man within the group, the one who steers talks with the military council, orchestrator of parliamentary elections and the negotiator with Arab Gulf countries and International Monetary Fund over loans.

“El-Shater is the real power center and he is struggling to expand the group’s powers within Egypt’s system and institutions against the generals’ will,” said Khalil el-Anani, expert on Islamist movements.

El-Shater will go up against other candidates with greater name recognition and a stronger television presence, such as ex-Arab League chief Amr Moussa.

Since its victory in parliamentary elections, the Brotherhood has been emboldened to press its demands. Foreign officials and diplomats flocked to its offices, and the group has even negotiated with international organizations on loans.

However, the group’s power was curtailed by Egypt’s interim constitution, which gives the rulingmilitary council the sole authority to form or sack a government.

After the parliamentary victory, the Brotherhood demanded that the military council allow it to form a new Cabinet. With the government failing to address deepening economic and security problems, the group was concerned its own popularity might be dented now that it rose to the leading political bloc.

The ruling generals refused and Kamal el-Ganzouri, the prime minister, waved a court order in the face of the Brotherhood leader to dissolve parliament if the group pushed further on trying to dismiss the government.

“The heart of the conflict is the new political arrangement, the power sharing scheme and what share the Muslim Brotherhood would have,” el-Anani said. “The el-Shater card will complicate the game and push the relationship with the ruling military council to risky ends,” he added.

Power in Egypt has long been concentrated in the office of the presidency, something that could change with the drafting of a new constitution.

One thing that may have lent urgency to the Brotherhood’s nomination of a candidate is the possibility that Mubarak’s former vice president, Omar Suleiman, may run. His campaigners said in a statement that by next week, he will finalize his decision.

Suleiman would be the ruling generals’ preferred candidate, someone who would try to keep the old political system intact and protect the privileges of the military.

The decision to run a presidential candidate may also have as much to do with the Brotherhood’s internal politics as its long-term plans. Two other Islamists — one a relative liberal and the other a hardliner— are also running for president.

The Brotherhood has already sacked a number of its followers for supporting rival presidential candidate Abdel-Moneim Abolfotoh, who was expelled from the group when he defied the decision to not run in presidential elections.

In the first reaction to the group’s decision, Kamal el-Helbawi, longtime group leader and spokesman for the group’s office in London announced his resignation in an interview on Dream 2 TV and accused the group of acting like Mubarak’s party.

“I won’t stay in the group one day after today because of their lies,” he said.

El-Shater also faces off against the two other Islamist candidates, although the impact of him splitting the Islamist vote is lessened because the top two candidates in the first round of balloting will go on to a run-off. source – Yahoo News