Hundreds of Christians were under siege inside Cairo’s Coptic cathedral last night as Muslim security forces and local residents, some armed with handguns, launched a prolonged and unprecedented attack... 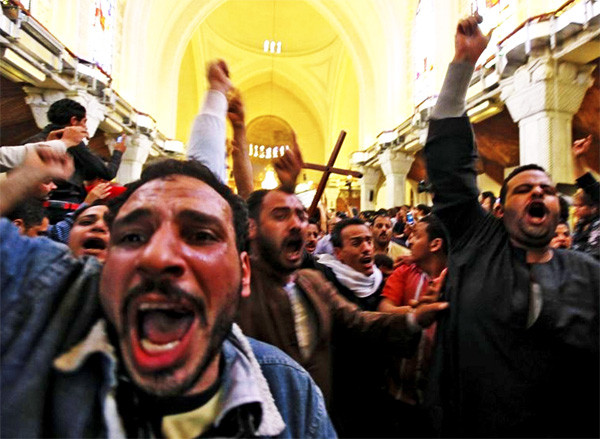 Mourners at St Mark’s Coptic cathedral in Cairo carry the coffin of one of the Egyptian Christians killed in sectarian clashes on Saturday
by Geoffrey Grider April 9, 2013
NOW THE END BEGINS SHARE:

Hundreds of Christians were under siege inside Cairo’s Coptic cathedral last night as security forces and local residents, some armed with handguns, launched a prolonged and unprecedented attack on the seat of Egypt’s ancient Church.

At least one person was killed and at least 84 injured as Christians inside the walled St Mark’s cathedral compound came under a frenzied assault from their assailants in the main road outside.

The fighting erupted after a mass funeral for five Copts who were killed during violent clashes in a north Egyptian town on Saturday. A Muslim man also died in the clashes, which happened after an Islamic institute was daubed with offensive graffiti.

Following yesterday’s service thousands of Christians poured out on to the street and began chanting slogans against Mohamed Morsi, the Egyptian President and long-time member of the Muslim Brotherhood.

“The Muslim Brotherhood and extremist groups here want us to leave. They don’t accept Copts. But this was our country, ever since the time of the pharaohs.”

Late last night President Morsi issued a statement in which he said he had spoken to Pope Tawadros II, the leader of the Coptic church, and had given orders for the cathedral and citizens to be guarded. He said protecting the lives of Muslims and Christians was a state responsibility and added: “I consider any attack on the cathedral as an attack on me, personally.”

The man killed in the clashes outside the cathedral was named by the state news agency, MENA, as Mahrous Hana Tadros, a Christian name. MENA said 11 of the 84 injured were police officers.

Earlier, witnesses described how they were attacked by locals from Abbasiyya, the north-east Cairo neighbourhood where the cathedral is located. After being hit by rocks from the roofs of nearby buildings, the mourners were reportedly forced back into the cathedral compound.

Wael Eskandar, an Egyptian blogger who attended the funeral, said he saw people being showered with broken bottles from the roof of an apartment block opposite. After being attacked, he said, the people “started racing out of the side street and destroying the nearby cars”. He added that he was not sure if those attacking the vehicles were mourners. As night fell the streets around St Mark’s were echoing to the sound of gunshots and exploding tear gas canisters. Young men on either side of the 18ft-high compound wall exchanged a continuous hail of rocks and broken masonry. Others hurled Molotov cocktails and let off fireworks.

The security forces positioned outside the cathedral launched volley after volley of tear gas into the compound. Some of the thousands of onlookers gathered in the road cheered as the canisters rocketed towards Christians perched on the walls overlooking the main street.

One young man, his right hand clasped around a shiny steel handgun, clambered on top of a petrol station alongside the cathedral and blasted a single round at those trapped inside. He was helped down by a friend who was also carrying a handgun, before they both jogged off through a nearby line of riot police who had been watching the young man take aim. Soon afterwards there was a flash from inside the compound as a young man stepped up on to the perimeter wall and fired a weapon towards the thousands of onlookers below.

A second later a number of people recoiled as they were hit by birdshot. Handguns and other weapons, many of them homemade, are becoming a more common feature of the violence which has regularly convulsed the country since the fall of Hosni Mubarak.

“Only God can save us from what is happening right now,” said Mina Zakaraya, a 25-year-old Coptic seminarian who was positioned inside the compound. At the cathedral’s rear entrance, panicked young men ushering people inside demanded to see the cross which most Copts have tattooed on their wrist.

“I’m worried about the situation in Egypt,” said Makram Girgis as he sat on the steps leading up to the imposing cathedral building. source – Independent UK