The Muppets are ending their relationship with fast food restaurant chain Chick-Fil-A in a show of support for gay marriage, the creators of the puppet troupe said on Monday.... 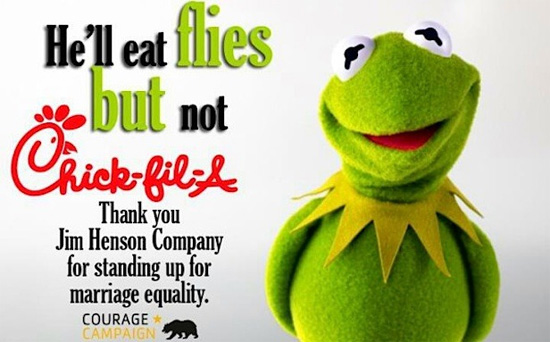 Kermit the Frog as a sodomite?
by Geoffrey Grider July 25, 2012
NOW THE END BEGINS SHARE:

From Reuters: – The Muppets are ending their relationship with fast food restaurant chain Chick-Fil-A in a show of support for gay marriage, the creators of the puppet troupe said on Monday.

“The Jim Henson Company has celebrated and embraced diversity and inclusiveness for over fifty years and we have notified Chick-Fil-A that we do not wish to partner with them on any future endeavors,” the company said in a statement posted on their official Facebook page.

Kermit the Frog as a sodomite?

The Henson company, named after the creator of lovable characters like Kermit the Frog and Miss Piggy, supplied their Creature Shop Muppet toys to Chick-Fil-A for children’s meal packages but decided to sever ties after recent statements by the fast-food chain’s Chief Executive Dan Cathy.

Cathy told the Baptist Press in a recent interview the company supported the “traditional family,” and “the biblical definition of the family unit.”

The Henson company, whose Muppet characters are hugely popular, said its Chief Executive Lisa Henson is a “strong supporter of gay marriage and has directed us to donate the payment we received from Chick-Fil-A to GLAAD,” the company said in their statement.

GLAAD is the Gay and Lesbian Alliance Against Defamation

Representatives for Chick-Fil-A were not immediately available for comment on Monday, but the company posted on their Facebook page last week that their restaurants “treat every person with honor, dignity and respect – regardless of their belief, race, creed, sexual orientation or gender.”

They added that they wanted to “leave the policy debate over same-sex marriage to the government and political arena.” source – Reuters