Drake, 32, now has a Boeing 767 cargo plane to call his own — and yes, it’s outlandishly huge. The rapper revealed his new ride on Instagram Friday. The huge jet features his OVO owl symbol, which is also the logo for Drake’s company October’s Very Own and record label OVO Sound.The Grammy Award-winning musician also took fans on a video tour of the elegant gold and brown interior of the fuselage which had leather sofas, chairs, and a bar.

The rapper Drake, who has surpassed The Beatles in song popularity, is now the proud owner of a 767 cargo jet despite his vocal climate change campaigning.

It seems like everywhere you turn these days, there’s some ultra-rich elitist Hollywood celeb lecturing you on how your wasteful habits are ‘causing climate change’. But if man-made climate change is real, then of course they would be leading lives with very low carbon footprints, right? Wrong. In fact, purchases of private jets by celebrities is dramatically on the rise in 2019, as we see in this story about climate change hypocrite and rap superstar Drake.

“But the day of the Lord will come as a thief in the night; in the which the heavens shall pass away with a great noise, and the elements shall melt with fervent heat, the earth also and the works that are therein shall be burned up.” 2 Peter 3:10 (KJV)

Is the climate changing? It sure is, our climate system is in a constant state of cyclical change, and has been since the end of Genesis chapter 3. A great case in point is an excerpt from an article written up in the Monthly Weather Review for their November 1922 issue, and it’s quite the eye-opener. It’s also absolute proof that weather changes – going from colder to hotter then back to colder – have always been going on and are unchangeable.

Kinda funny how the ice caps were melting in the 1920’s as shown below, but by the 1970’s things had grown so cold that the scientist were calling for another ice age. Hmm…

The Arctic ocean is warming up, icebergs are growing scarcer and in some places the seals are finding the water too hot, according to a report to the Commerce Department yesterday from Consul Ifft, at Bergen, Norway.

Reports from fishermen, seal hunters and explorers, he declared, all point to a radical change in climate conditions and hitherto unheard-of temperatures in the Arctic zone. Exploration expeditions report that scarcely any ice has been met with as far north as 81 degrees 29 minutes. Soundings to a depth of 3,100 meters showed the gulf stream still very warm.

Great masses of ice have been replaced by moraines of earth and stones, the report continued, while at many points well known glaciers have entirely disappeared. Very few seals and no white fish are found in the eastern Arctic, while vast shoals of herring and smelts, which have never before ventured so far north, are being encountered in the old seal fishing grounds. source

FROM CLIMATE DEPOT: Drake acquires a gigantic plane. – Via Daily Caller – “The superstar rapper showed off his plane, called “Air Drake,” on Instagram Friday, and it’s downright absurd. The interior is absolutely massive, and he points out that it’s not a ‘timeshare’ or ‘rental.’ It’s just all his.”

The private jet ownership is despite his efforts to campaign against climate change in his songs. With song lyrics that include: “[They’re] talkin’ bout how the weather’s changing / the ice is melting / like the world is ending,” you would think he would try to live a low carbon lifestyle, but alas.

Drake, 32, now has a Boeing 767 cargo plane to call his own — and yes, it’s outlandishly huge. The rapper revealed his new ride on Instagram Friday. The huge jet features his OVO owl symbol, which is also the logo for Drake’s company October’s Very Own and record label OVO Sound.

The Grammy Award-winning musician also took fans on a video tour of the elegant gold and brown interior of the fuselage which had leather sofas, chairs, and a bar.

Flashback: Drake’s climate change epiphany – He uses the song as a platform to rail against climate change and examine his own complicity in the ongoing degradation of the natural world…

Drake slips in: ‘[they’re] talkin’ bout how the weather’s changing / the ice is melting / like the world is ending.’ One might, perhaps, assume Drake is referring to the usual ice melting in post-winter Toronto; especially given the line’s casual delivery and the beat-drop of the bridge that follows immediately after, as if forgetting he said it at all. But as we drop off this icy berg into the bridge – ‘She asks me, “who are you gonna be, when it’s all over, when it’s all over?”’ – it is apparent that Drake’s simple moment of contemplation has had a transformative effect….

He enters a state of existential reflection, with a realization of his impending mortality: what will be the intrinsic value of his music, if the ice caps melt and the world is no longer sustainable? Or perhaps more pertinently, he realises that with his stadium-sized cultural standing, and ability to impact on the world at large, he is in an undeniable position of power to enact meaningful change and ensure the survival of the planet’s ecosystem – a network nearly as complicated, beautiful, and wonderfully diverse as Drake himself.  READ MORE

Celebrity Climate Change Hypocrites – Which Celebrities Are Really Going Green? You might be surprised.

After Leonardo DiCaprio famously used a private jet six times in six weeks, we decided to investigate – are the celebrities who preach about the environment really doing their best to help save it? With many big names and celebrities often preaching about how the world needs to step up, it sometimes feels like we’re not doing our part. However, are the rich and famous holding up their end of the bargain? Or are these just empty words? See for yourself how some of the world’s biggest celebrities are also some of the world’s biggest climate change hypocrites.

In April 2018, Facebook spent nearly $9m on private jets and security flying Mark Zuckerberg around the US. He plans on visiting all 50 states to find out more about the people who use his social network. Although he has a relatively modest car collection, his big purchase was the $1.4m Pagani Huayra which only manages 13 mpg on a good day. 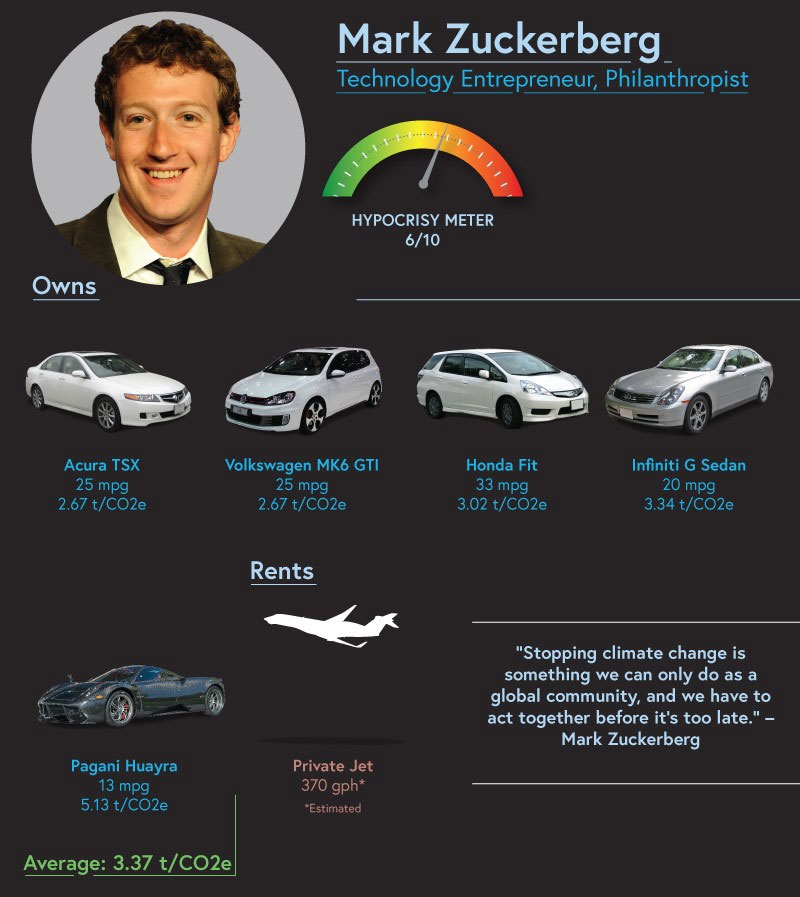 After telling the world that taking bold action on climate change is the right thing to do for the people of the planet, Richard Branson’s main vehicles for luxury travel are his Dassault Falcon 50 EX private jet and Necker Belle yacht. He also uses an amphibious Gibbs Aquada to occasionally travel across the channel from England to France with its 15 mpg fuel economy. He also previously owned the larger Dassault Falcon 900. 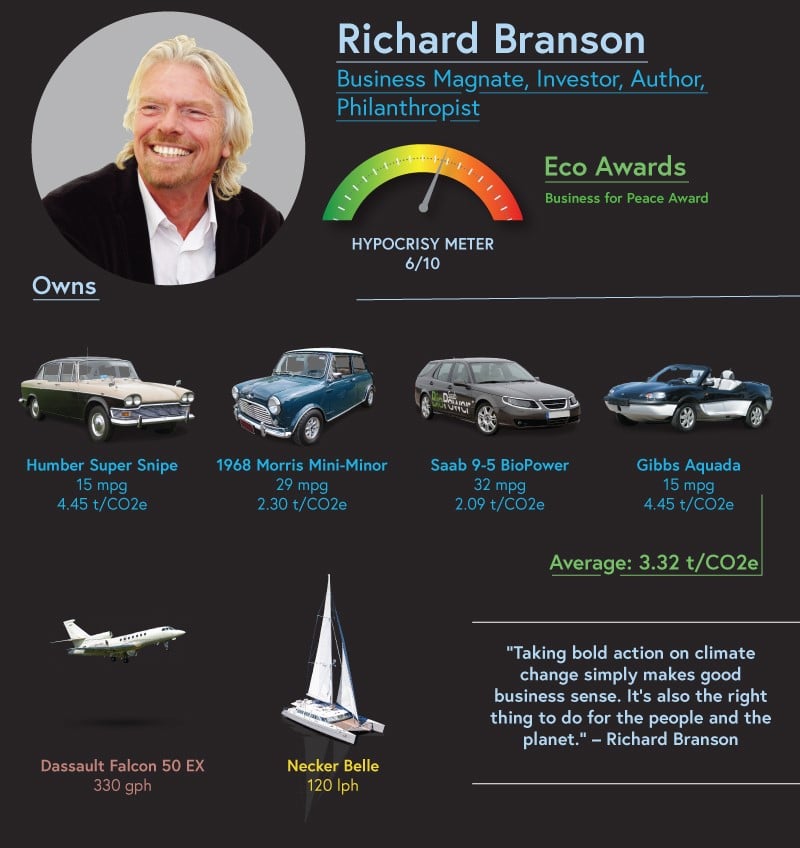 Bill Gates owns a collection of vintage Porsches, with the 18mpg 1988 Porsche 959 Coupe being the vehicle he uses on a daily basis. For longer journeys, he uses the Bombardier BD-700 Global Express jet mainly for business. 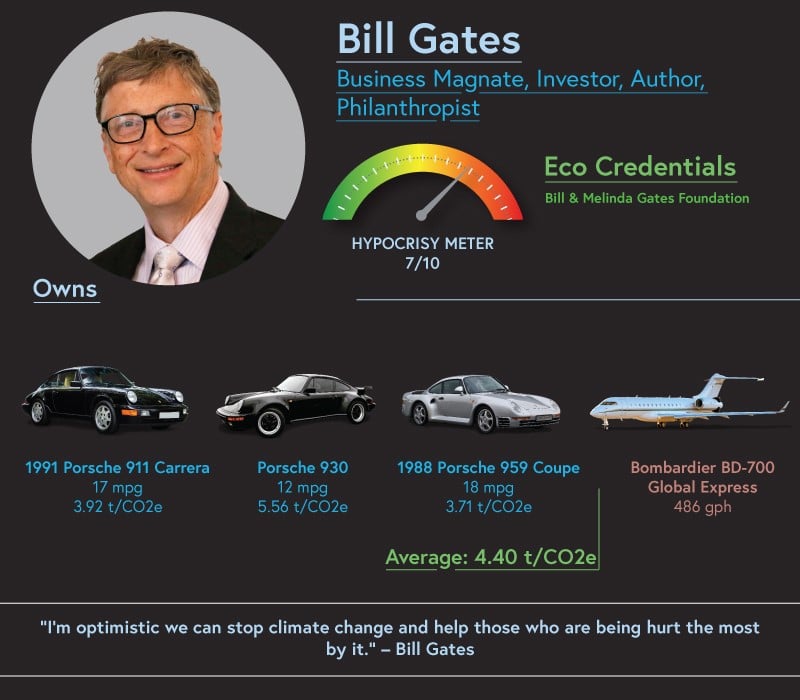 Along with being a successful filmmaker, James Cameron is also a keen motorcyclist, owning a Ducati 848 EVO and three Harley Davidson’s. He’s also been known to meet up with Arnold Schwarzenegger, another celebrity on our list to show off their prized bikes. He owns a wide variety of vehicles from the environmentally conscious Tesla Model S to the more fuel hungry Ford GT. 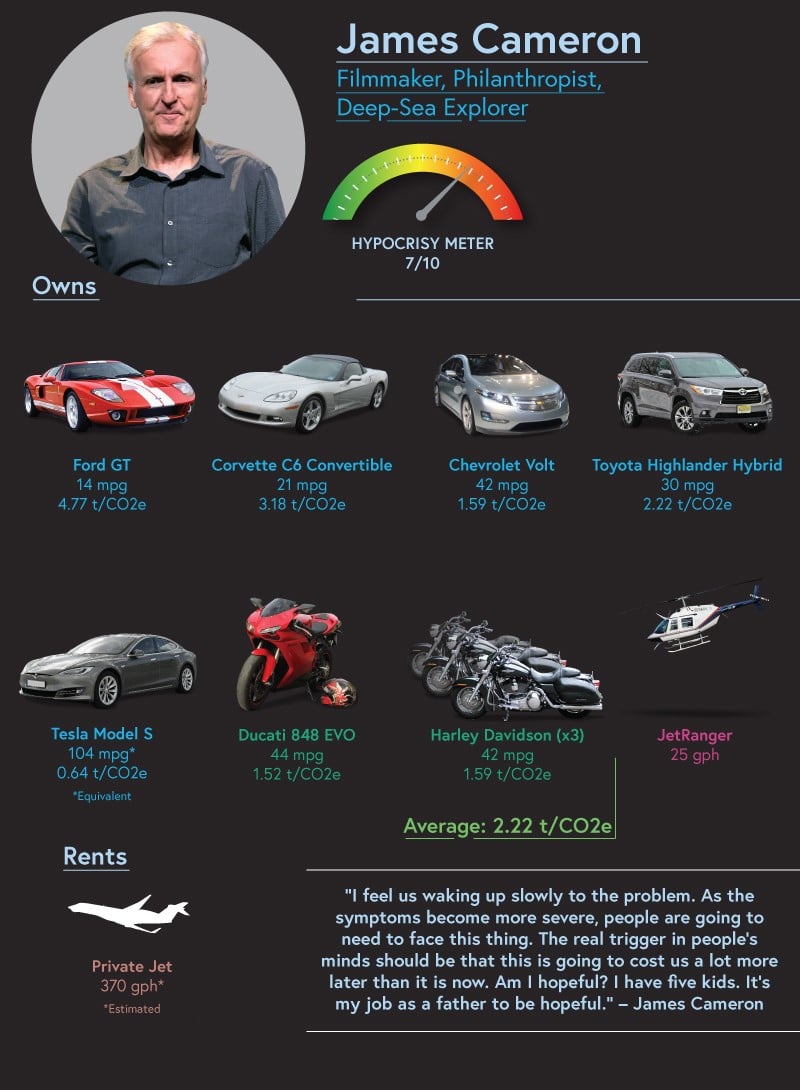 After winning awards such as the United Nations Messenger of Peace and the Clinton Global Citizen Award, it’s safe to say that Leonardo DiCaprio is Hollywood’s climate change King. However, he has been involved in several controversies which contradict his strong environmental beliefs such as flying by private jet from Cannes to New York to pick up an environmental award and back again. 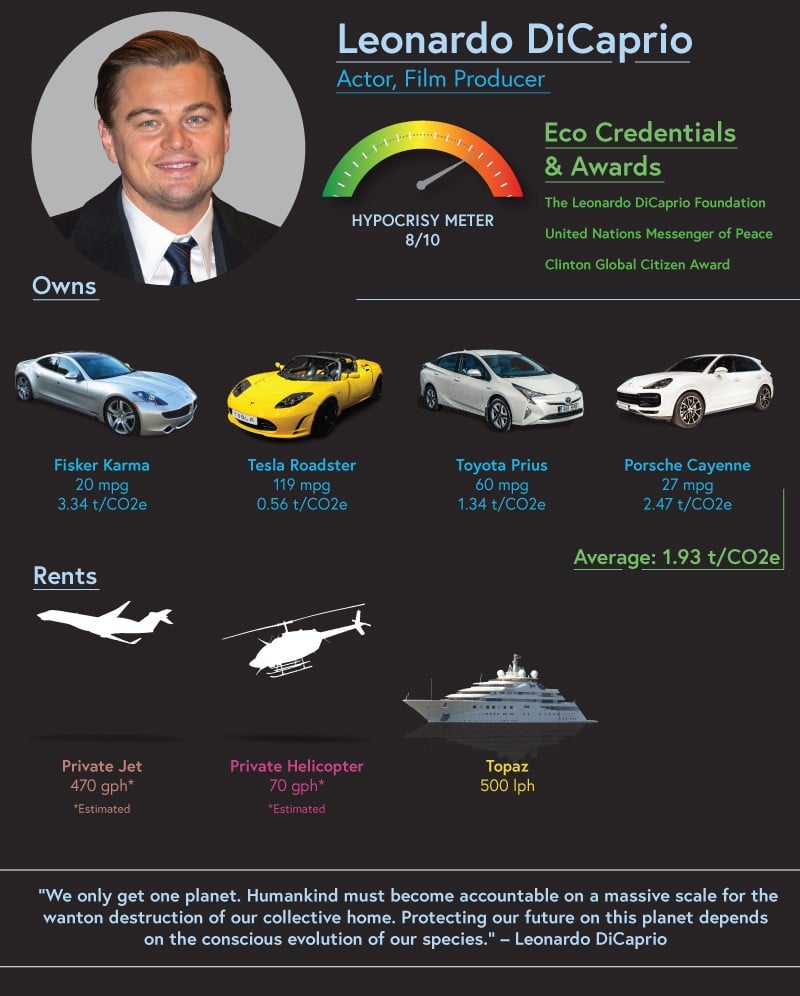 Pharrell Williams has become increasingly concerned about our environment in recent years. Recently speaking at a United Nations Foundation event, the rapper told the audience that we must take action on climate change before it’s too late. He’s keeping his collection luxury cars, however, with his Rolls-Royce Phantom and Ferrari Enzo being some of the highlights. 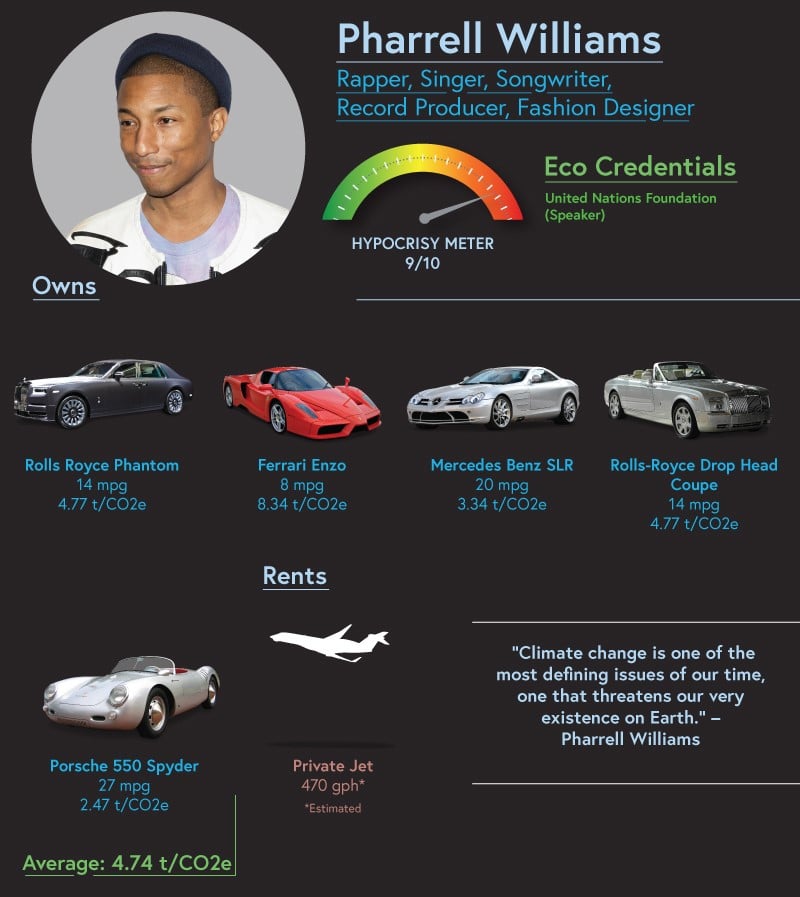 After winning his International Climate Leadership Award in 2009, Arnie told us about his vision to fight climate change by passing a new law while Governor of California that rolled back emissions by 25% and approving a multimillion-dollar solar roof initiative. Nearly 10 years on, and his average CO2e emissions rating is one of the highest on our list. His most fuel-sapping vehicles include a Bugatti Veyron Vitesse, military-grade Hummer H1 and his Gulfstream III jet. 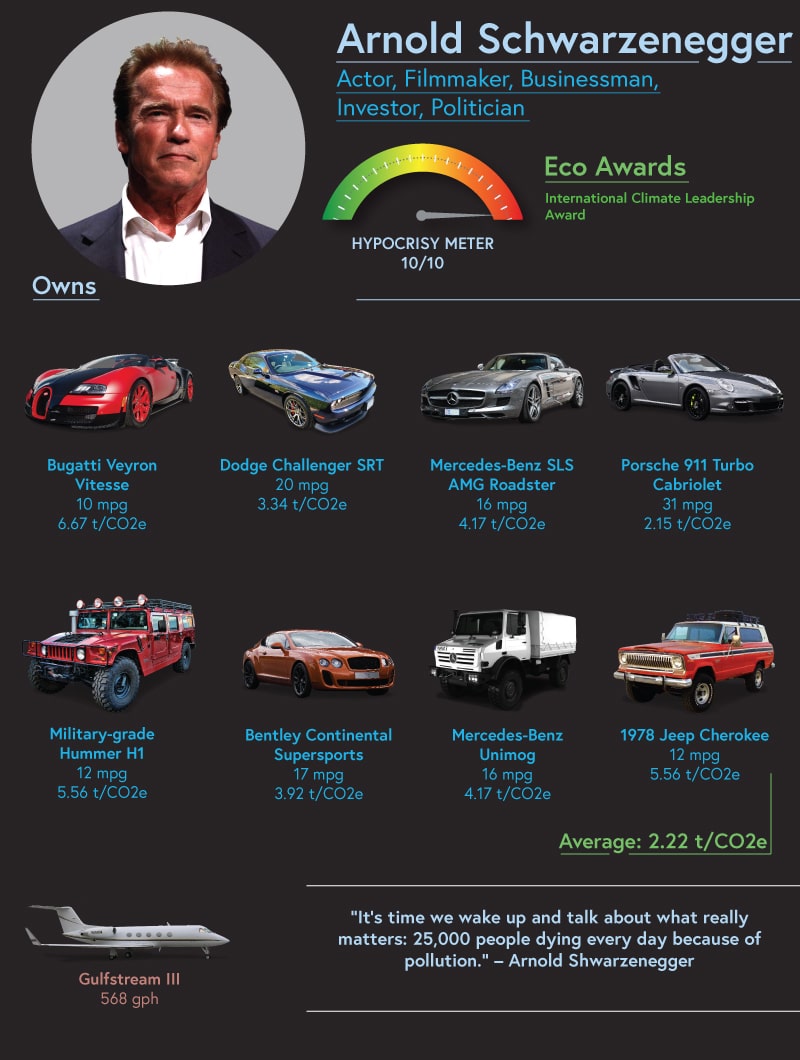