US Republican presidential candidate Mitt Romney plans to declare his commitment to the notion of "a democratic, prosperous Palestinian state.... 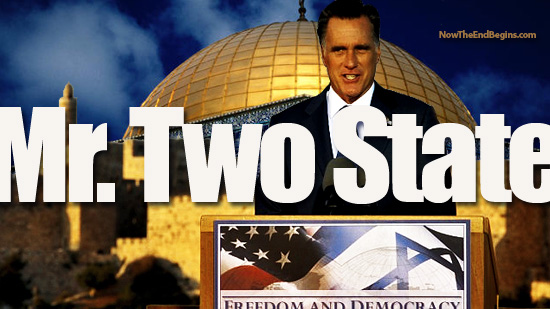 Mormon candidate for president Mitt Romney endorses whole-heartedly the slicing up of God's Holy Land of Israel in order to create a Palestinian state.
by Geoffrey Grider October 8, 2012
NOW THE END BEGINS SHARE:

God has plans for a One State Solution

“For, behold, in those days, and in that time, when I shall bring again the captivity of Judah and Jerusalem, I will also gather all nations, and will bring them down into the valley of Jehoshaphat, and will plead with them there for my people and for my heritage Israel, whom they have scattered among the nations, and parted my land.” Joel 3:2

From Jerusalem Post: US Republican presidential candidate Mitt Romney plans to declare his commitment to the notion of “a democratic, prosperous Palestinian state living side by side in peace and security with the Jewish state of Israel,” according to advance excerpts of his remarks provided by his campaign released on Sunday.

Mormon candidate for president Mitt Romney endorses whole-heartedly the slicing up of God’s Holy Land of Israel in order to create a Palestinian state.

The speech marks an attempt to soften his stance on the peace process following leaked video footage last month where the presidential candidate questioned the feasibility of the establishment of a Palestinian state in the West Bank.

“I look at the Palestinians not wanting to see peace anyway, for political purposes, committed to the destruction and elimination of Israel, and these thorny issues, and I say, “There’s just no way.”” Romney said last month.

Romney is to make the renewed commitment in a major foreign policy speech, titled “The Mantle of Leadership”, in Lexington, Virginia late Monday evening where he intends to lay out his vision for American foreign policy. According to reports, he hopes to draw “great contrast” with that of President Barack Obama, notably on Syria, Libya and Egypt. He is also billed to talk on the Iranian nuclear threat, where he is to warn Iran not to pursue nuclear weapon capability and said the US had to back this up “through actions, not just words.” source – JPost