A Silicon Valley company called Knightscope is currently testing a prototype robot designed to detect and monitor criminal activity, much the way a police officer or a security... 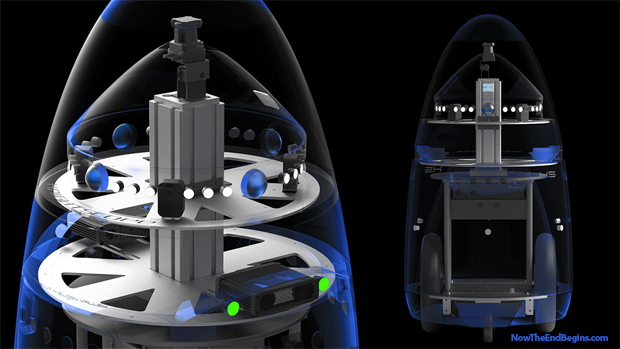 The New World Order – Illuminati people have got us right where they want us. As bold as a lion, they are developing the world-wide Mark of the Beast Surveillance System right in front of our faces. We laugh, we giggle and coo over “how cute” it all is, and how much safer we will be. Really? We have sacrificed our freedoms and liberty for the much-touted but mythical “security”. In the end we will have none of them.

NTEB over the years has brought you well over 100+ stories like this one, to warn you of the nearness of the time, But you forget these stories mere days after publication. Do a search in our database on any of the search terms in this article and you will see so many it will make you sick. Literally.

Time: Have we as a species learned nothing from Minority Report? A Silicon Valley company called Knightscope is currently testing a prototype robot designed to detect and monitor criminal activity, much the way a police officer or a security guard would.

The Knightscope K5 is a five-foot-tall autonomous robot (one presumes that its resemblance to a Dalek is merely coincidental) that roams around your neighborhood, observing and gathering data and trying to predict where and when criminal activity will occur.

Knightscope is developing technology that will predict and prevent crime with an innovative combination of hardware, software and social engagement.

It carries no weaponry, but it has a pretty complete sensor package that includes thermal imaging, license plate reading and facial recognition. This takes public surveillance a step beyond stationary cameras, and the challenges to personal privacy are clear. The K5 could do a whole lot of good by deterring crime, especially in neighborhoods that lack the resources to field an adequate police presence.

But where do you draw the line? source – Time