Not only are Muslims lining up to raid the free food pantry for the poor, but now they insist on Halal shelves with no pork because they can’t be... 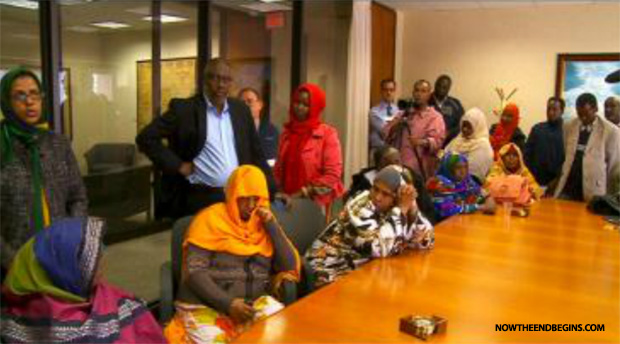 When do we simply tell them “no, this is America?”

Muslims are demanding a tax-funded non-pork food shelf at a free food pantry for the poor–or an entire tax-funded halal food pantry (I’m not sure which)–in Minneapolisistan. And the lesson is: give an inch, they take a mile.

We are constantly told by propagandists who massage and fake statistics, that Muslims are more well-educated, wealthy, and less likely to go on the public dole. We’re told the same about illegal aliens. None of that is true. In fact, Muslims and illegal aliens are very likely–highly likely!–to take advantage of dumb Western infidels’ charity and naive good nature and feed on the public trough. Go to Dearbornistan and see all the Mercedes and Hummer drivers who are on welfare, Medicaid, food stamps, and AFDC.

And the ISIS/Al-Shabaab-supporting Muslims from Somalia who populate Minneapolistan are no different. Not only are they lining up to raid the free food pantry for the poor, but now they insist on Halal shelves with no pork because they can’t be bothered to read ingredients or actually learn how to read and understand English. Ah, the good graces of immigrants! Remember, this is the state from which two of the Muslim ISIS “American” shaheeds (martyrs) emanated.

Click to read the rest of this story on Debbie Schlussel.com