In announcing her support for Monsanto and GMOs for children, the First Lady declared "When I see a company like Monsanto launch an initiative like this, I feel more... 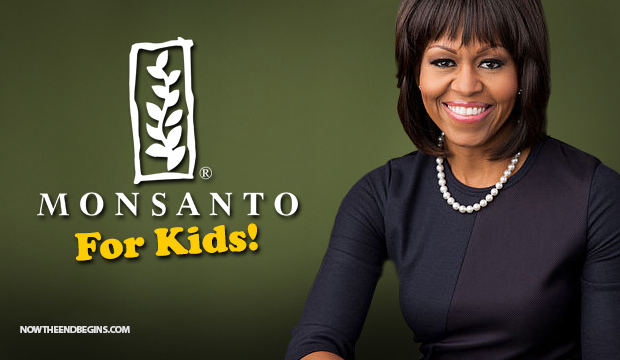 In announcing her support for Monsanto and GMOs for children, the First Lady declared "When I see a company like Monsanto launch an initiative like this, I feel more hopeful than ever before..."
by Geoffrey Grider July 25, 2014
NOW THE END BEGINS SHARE:

All part of the Obama agenda to collapse America

EDITOR’S NOTE: This story, as originally published, is thought to have been put out there by the Daily Leak as satire. But we leave this story up to illustrate the deadly connection between Monsanto and the Obama administration that has been verified.

“The popular agriculture company Monsanto is partnering with First Lady Michelle Obama to promote nutritional foods for kids,” reports DailyLeak.org. (1) “According to reports from the Associated Press, Monsanto will spend $50 million over five years on a campaign to market ‘healthy’ genetically modified food to children.”

“It’s not clear how a company that’s primarily known for producing seeds and herbicides for farmers is going to nudge children into eating foods the first lady thinks they should be eating,” reports EAGNews.com.“Details of this deal have been sketchy, perhaps intentionally so. After all, the unholy alliance of Big Government and Big Business is one definition of fascism.”

The “final solution” sellout of the White House?

Michelle Obama once promoted fresh garden vegetables but never quite pushed for organics. With this Monsanto announcement, she’s now reversed all progress on healthy foods and has teamed up with the corporation that produces corn seeds containing deadly toxins linked to massive cancer tumors in rat experiments.The chemical sprayed on GM crops — glyphosate — is also linked to wildly destructive environmental effects as well as huge increases in human cancer.