Huma Abedin, Clinton’s deputy chief of staff, who is said to advise the secretary of state on Middle East policy, was a member of the executive board of the... 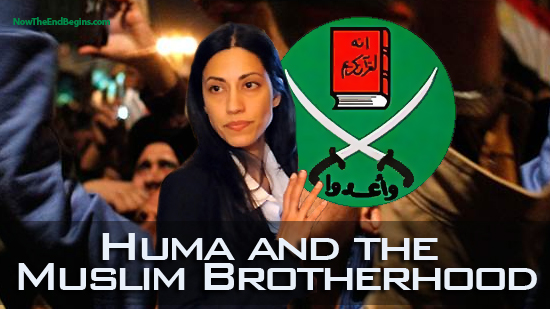 “A wise man will hear, and will increase learning; and a man of understanding shall attain unto wise counsels” Proverbs 1:5

With each passing day new evidence comes out that the Muslim Brotherhood is connected with the Obama White House at the highest possible levels. America, if you re-elect this man, our ruin will be assured and complete.

From Before It’s News: This is what Carl has been reporting on  – on FREEDOM FRIDAY WITH CARL GALLUPS and on PPSIMMONS for the last year. It is also what Michelle Bachmann and four other congressmen took a personal attack on from John Boehner, John McCain and Marco Rubio – so called conservatives. More than likely there is an unabated JIHAD occurring in the White House and in Washington D.C.  Our current leaders either don’t care, are involved in the Jihad, or are too stupid and “politically correct minded” to see it. God help us.

Connections to the Muslim Brotherhood run all the way up to the White House? Should you be worried? (nah, how bad could it be?)

“As five House members continue to call for an investigation of Muslim Brotherhood influence on the federal government, a researcher who has documented numerous ties between Hillary Clinton’s top aide and the global Islamic supremacist movement has found another connection.

Huma Abedin, Clinton’s deputy chief of staff, who is said to advise the secretary of state on Middle East policy, was a member of the executive board of the Muslim Student Association, according to an archived Web page discovered by researcher Walid Shoebat.

The Muslim Student Association, or MSA, was identified as a Muslim Brotherhood front group in a 1991 document introduced into evidence during the terror-financing trial of the Texas-based Holy Land Foundation trial.” source – Before It’s News