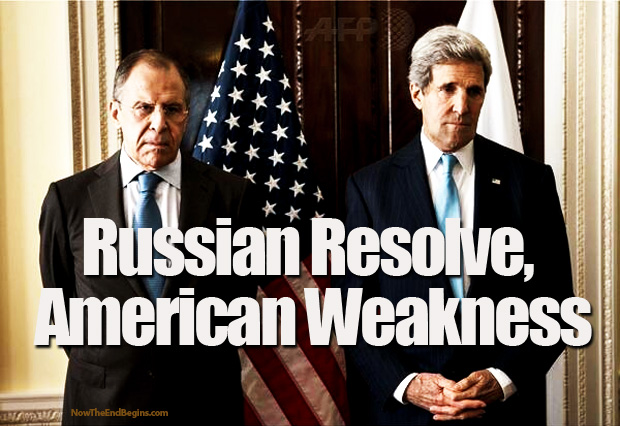 As a student of history, I have been racking my memory banks trying to come up with another president and administration that was as weak and ineffectual as this Obama administration is. Jimmy Carter’s tragic attempt to deal with the American hostages in Iran in 1980 comes close, but Obama is actually weaker than that. Much, much weaker. It is truly a humiliating time to be an American.

Please stand by while Russia takes Ukraine, and Obama takes another vacation.

Ukraine: Russian President Vladimir Putin is preparing to “invade eastern Ukraine” after occupying the country’s Black Sea peninsula of Crimea, Estonia said. Russia warned that Ukraine’s government has lost control of the country today, fueling concern the Kremlin may extend a military intervention as U.S. Secretary of State John Kerry called for it to halt a takeover of the disputed province.

Look at Sergey Lavrov’s face, and what do you see? Victory. Now look at John Kerry’s face, already surrendering and admitting defeat. Pathetic.

Events in Ukraine “clearly show that the Russian Federation only accepts force,” Estonian Defense Minister Urmas Reinsalu said in an e-mailed statement today. To deter Putin, “a clear message needs to be sent that an attack will cost the aggressor dearly.”

In the biggest dispute between Russia and the West since the fall of the Iron Curtain, the standoff is shaking markets and threatening to upset more than two decades of economic and diplomatic integration between former Cold War enemies. It’s also raising the risk that a lasting geographical conflict zone may emerge between Russia and the European Union. source – Bloomberg