Are Hillary Clinton’s Seizures And Stumbling Being Caused By Subcortical Vascular Dementia?

Then there was this freakish episode from her rally on August 4th where she was momentarily disoriented and needed to be steadied by someone who was either a Secret Service agent or one of her doctors. Take a good, close look at the expression on her face as she loses sense of where she is mentally, and does not regain her composure until the man who appeared at her side steadied her.

UNFIT FOR OFFICE: Hillary Clinton’s continued and questionable poor health should be the major issue of this campaign.

The main stream media has been doing it’s best to hide the truth about Hillary Clinton’s rapidly deteriorating health, but it’s getting to be a harder and harder trick to continue to pull off. Just yesterday the Twitterverse lit up with photographs of her seemingly unable to make it up a flight of steps as seen here:

Then there was this freakish episode from her rally on August 4th where she was momentarily disoriented and needed to be steadied by someone who was either a Secret Service agent or one of her doctors. Take a good, close look at the expression on her face as she loses sense of where she is mentally, and does not regain her composure until the man who appeared at her side steadied her.

The man who many are now saying is one of her doctors whispered the following into her ear:

“No, you’re OK…keep talking, you handle it, we’re not going anywhere.”

With  that, she managed to pull herself together and then tried to proceed as if nothing had happened. But the proverbial cat, by this time, was already well out of the bag.

Lastly, tonight we received a photograph of medical papers that purport to be from one of the doctors who has been treating her for the brain and vascular issues that she will admit to, Dr. Lisa Bardack. Are these medical reports genuine? We have no way of knowing, but here they are for our millions of readers around the world to check out: 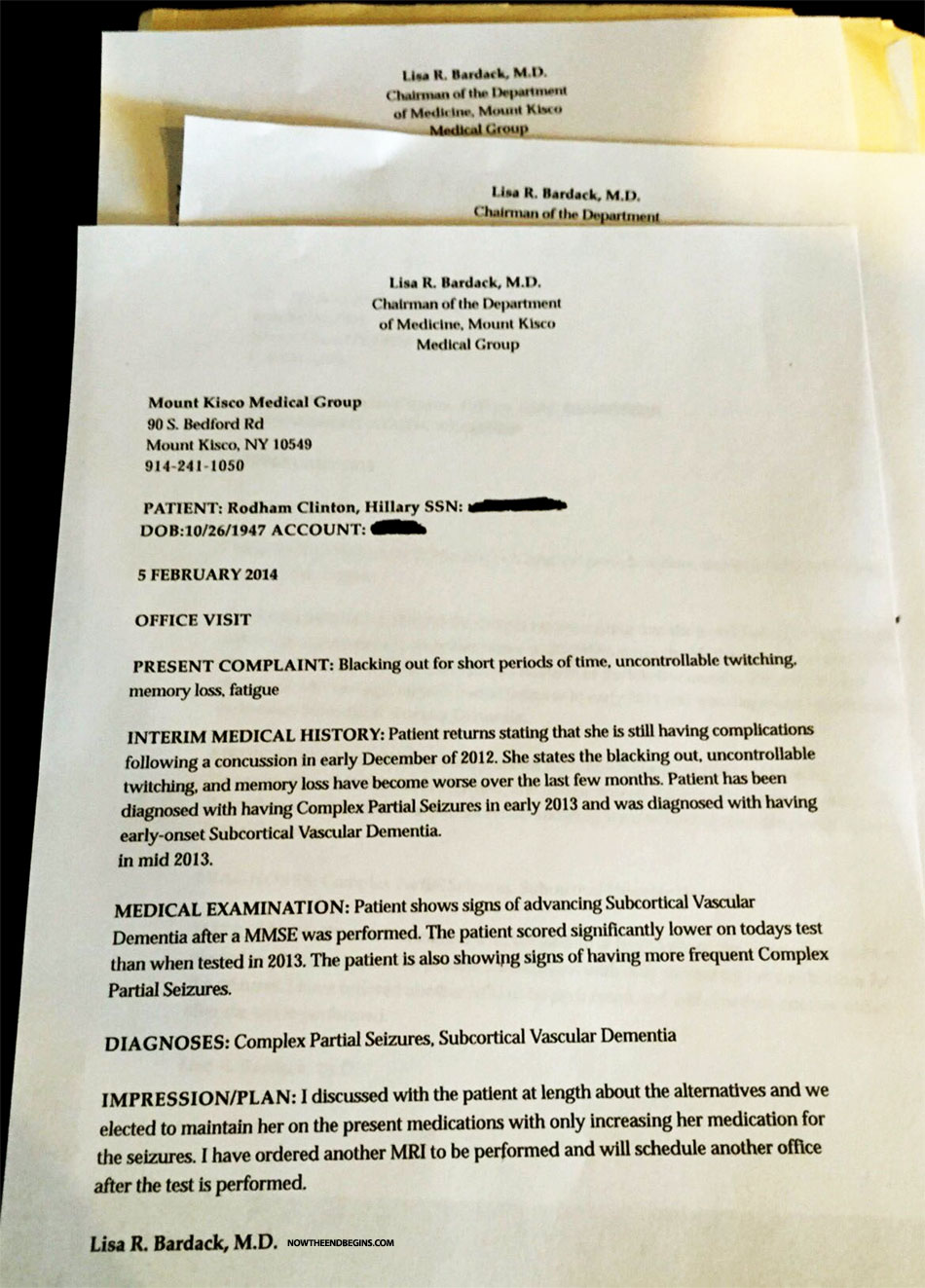 The medical diagnoses fits well with things that Dr. Bardack has already gone on record as saying. But a diagnosis of Subcortical Vascular Dementia would immediatly bring the Hillary Clinton campaign to a grinding halt.

Vascular dementia symptoms may be most obvious when they happen soon after a major stroke. Sudden post-stroke changes in thinking and perception may include:

These changes may happen at the same time as more familiar physical stroke symptoms, such as a sudden headache, difficulty walking, or numbness or paralysis on one side of the face or the body.

One thing is absolutely for certain, however, that Hillary Clinton’s behavior is getting stranger and stranger like you would expect in someone with vascular dementia. She has had dozens of uncontrollable coughing fits, numerous instances of exhibited weakness in her extremities, falling down more and more frequently, and the list goes on. All symptoms of Subcortical Vascular Dementia. Go look it up.

Hillary Loses It – Seems Like Momentary Blackout and Dizzy Spell:

From this point on I am no longer interested in which foreign government gave how many millions to the Clinton Foundation, or her tax records or donor lists. What I really want to see, and what America needs to see, and what Donald Trump needs to demand to see is her medical records.