The enormous platform has no known parallels to any other structure in Selah, Petra. Archaeologists Sarah Parcak, a National Geographic fellow, and Christopher Tuttle, executive director of the Council of American Overseas Research Centers, used high-resolution satellite imagery followed by aerial drone photography and ground surveys to locate and document the structure.

An enormous monument has been hiding in plain sight at the World Heritage site of Selah, Petra, according to a study recently published in the Bulletin of the American Schools of Oriental Research.

“Send ye the lamb to the ruler of the land from Sela to the wilderness, unto the mount of the daughter of Zion. For it shall be, that, as a wandering bird cast out of the nest,so the daughters of Moab shall be at the fords of Arnon. Take counsel, execute judgment; make thy shadow as the night in the midst of the noonday; hide the outcasts; bewray not him that wandereth. Let mine outcasts dwell with thee, Moab; be thou a covert to them from the face of the spoiler: for the extortioner is at an end, the spoiler ceaseth, the oppressors are consumed out of the land. And in mercy shall the throne be established: and he shall sit upon it in truth in the tabernacle of David, judging, and seeking judgment, and hasting righteousness.” Isaiah 16:1-5 (KJV)

Regular readers of NTEB have a leg up on the rest of the Bible believing world because they know something about the Biblical city of Petra that isn’t taught in any seminary in America. And that’s the fact that the full name of Petra is Selah, Petra, and that the word ‘selah’ in the Bible is a direct reference to what life will be like for Jews in the time of Jacob’s trouble that flee there for refuge as Jesus prophesied they would in Matthew 24. That type of ‘advanced revelation’ can only be found in the King James Bible.

The NIV Bible removes the word ‘selah’ completely –  In the King James 1611 Authorized Version Holy Bible, the word Selah appears exactly 75 times, and as we are showing you here it is a phenomenal prophecy clue as to the nature and character of the Second Coming of Jesus Christ. But the NIV REMOVES all 75 places in the Old Testament where the word appears, replacing it with NOTHING. Just simply erased it! Now, since the word Selah reveals so much about the Second Coming of Jesus, who do YOU think would want the word removed and hide all that information from you?

This story today from the National Geographic sheds exciting, new light on the place where God will hide His people the Jews during the time of Jacob’s trouble.

They report that the monument is roughly as long as an Olympic-size swimming pool and twice as wide. It sits only about half a mile (800 meters) south of the center of the ancient city.

The enormous platform has no known parallels to any other structure in Petra.

The caravan city of Petra, in what is today southern Jordan, served as the capital of the Arab tribe known as the Nabataeans from its likely founding in the mid-second century B.C. The site was essentially abandoned at the end of the Byzantine period in the seventh century A.D.

As evidenced by the latest discovery, while the hinterlands north and south of Petra’s ancient city center have been well surveyed since explorer Johann Burckhardt arrived in 1812, new discoveries continue to be made around its urban core.

A First for Petra

The newly revealed structure consists of a 184-by-161-foot (about 56-by-49-meter) platform that encloses a slightly smaller platform originally paved with flagstones. The east side of the interior platform had been lined with a row of columns that once crowned a monumental staircase.

A small 28-by-28-foot (8.5-by-8.5-meter) building was centered north-south atop the interior platform and opened to the east, facing the staircase.

This enormous open platform, topped with a relatively small building and approached by a monumental facade, has no known parallels to any other structure in Petra. It most likely had a public, ceremonial function, which may make it the second largest elevated, dedicated display area yet known in Petra after the Monastery. While the monument has not been excavated, the presence of surface pottery dating from the mid-second century B.C. suggests that construction of the structure began during the Nabataeans’ initial public building program. 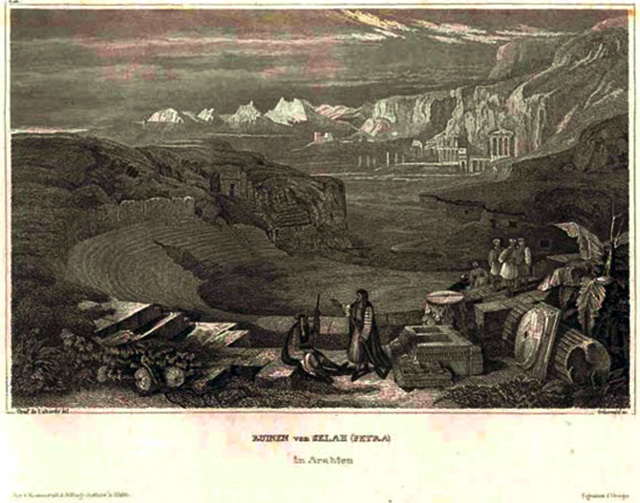 In the ancient world, the rock walled city of Petra was commonly referred to by it’s full name of Selah, Petra. This steel engraving of the Ruinen von Selah Petra (the Ruins of Selah Petra) 1850, by Laborde proves that.

Most of the monuments that can be seen in Petra today, such as its iconic Treasury and the Monastery, were built during its second heyday, from the end of the first century B.C. to the second century A.D. The city had already been around for a century or more by that time, notes Tuttle, which may make the new discovery a unique public monument from the city’s early years.

In describing the find, Tuttle hails the use of satellite and drone imagery for providing archaeologists with the broad aerial perspectives that enable them to identify the faint footprints of ancient buildings, and then understand how historical monuments and sites relate to each other across the landscape.

“I’m sure that over the course of two centuries of research [in Petra], someone had to know [this site] was there, but it’s never been systematically studied or written up,” says Tuttle. “I’ve worked in Petra for 20 years, and I knew that something was there, but it’s certainly legitimate to call this a discovery.” source