CAIRO — A natural gas pipeline that runs through Egypt's North Sinai exploded Saturday, disrupting flows to Israel and Jordan. The blast came after Islamists called on militants to... 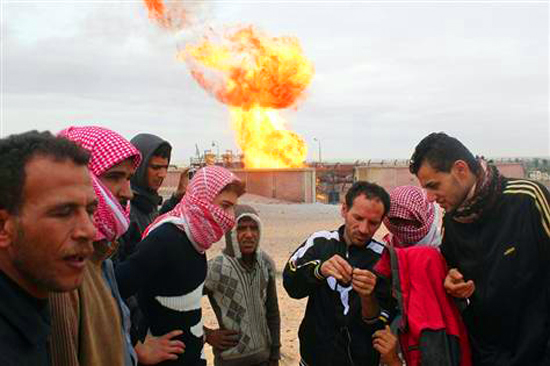 The situation in Cairo was sent to a new level with a massive explosion of a natural gas pipeline. Round and round she goes…where she stops, nobody knows.

Flames rise from a gas pipeline after an explosion as Egyptians gather at the site in the northern Sinai Saturday.

CAIRO — A natural gas pipeline that runs through Egypt’s North Sinai exploded Saturday, disrupting flows to Israel and Jordan. The blast came after Islamists called on militants to exploit the unrest that has rocked the government and there were reports of attacks by saboteurs, but also claims it was caused by a gas leak.

State television quoted an official as saying earlier Saturday that the “situation is very dangerous and explosions were continuing from one spot to another” along the pipeline. “It is a big terrorist operation”, a state TV reporter said. A security source in North Sinai said “foreign elements” targeted the branch of the pipe that supplies Jordan.

However, the head of Egypt’s natural gas company, Magdy Toufik, said the fire was caused “as a result of a small amount of gas leaking.” A security source said the Egyptian army closed the main source of natural gas supplying the pipeline and was controlling the fire. Television footage showed a tower of flame at the scene visible for dozens of miles away. It was later put out. source – MSNBC