The Eternals stars Angelina Jolie, Salma Hayek, Kit Harrington, and Kumail Nanjiani, and is about superheroes who live underground and then emerge to save the world, or something. “On Thursday, actor Haaz Sleiman teased his upcoming on-screen kiss with costar Brian Tyree Henry, ” reports MSN.  “It’s a beautiful, very moving kiss,” Sleiman said. “Everyone cried on set.” “For me, it’s very important to show how loving and beautiful a queer family can be,” he added. “We forget that because we’re always depicted as sexual or rebellious; we forget to connect on that human part.”

Marvel is promoting its first man-on-man gay kiss, which will be featured in Eternals, set to plague your local theater on November 6th later this year.

Marvel Comics is proud of being the movie production company that will be the ones to bring the first man-on-man gay kiss to the big screen in their November release of ‘Eternals‘ later this year. And the ‘buzz’ is that is not going to be a quick peek, but a long, lingering romantic kiss. And because we are in the woke generation, it has to be a kiss not just between two men, but between a white man and a black man. I’m surprised one of them is not in a wheelchair. Is there no end to this? Nope, there isn’t.

“And likewise also the men, leaving the natural use of the woman, burned in their lust one toward another; men with men working that which is unseemly, and receiving in themselves that recompence of their error which was meet.” Romans 1:27 (KJB)

Comics have become the latest tool in the war on Christians to ram through the radical agenda of the LGBTQ+P for Pedophile Movement. Nothing is safe anymore, everything has been weaponized, and soon the persecution of Christians will move from working passively to working actively and aggressively. If you’re a Christian and you go see this movie, please stop calling yourself a Christian unless you are going there to pass out tracts and preach against it.

“For me, it’s very important to show how loving and beautiful a queer family can be,” he added. “We forget that because we’re always depicted as sexual or rebellious; we forget to connect on that human part.” The Eternals will also feature a deaf superhero.

No word yet on the one-legged Eskimo lesbian with a harelip, a marginalized minority group that remains under-represented in movies, television, literature, stage, and song. The Eternals stars Angelina Jolie, Salma Hayek, Kit Harrington, and Kumail Nanjiani, and is about superheroes who live underground and then emerge to save the world, or something. Well, this should be interesting…

This Movie Brought To You By Romans 1 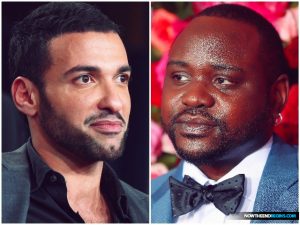 ARE YOU EXCITED TO SEE THESE TWO MEN DEEP KISS EACH OTHER?

Over and over and over again, at about a 100 percent rate, we have seen woke blockbusters crash and burn at the box office, or at least under-perform. The anti-male Birds of Prey is just the latest victim of audiences rejecting agendas and lectures disguised as entertainment.

Incredibly, this list also includes the Star Wars saga, which most of us believed was bulletproof. I’m not arguing the latest Star Wars trilogy was a flop. But it did perform so far below expectations, especially The Rise of Skywalker, which should have out-performed pretty much every other Star Wars movie, that as a movie franchise, Star Wars is dead.

Can Marvel break the Woke Curse? Can Marvel get away with using this guy-on-guy action as the tip of its promotional spear and not take a hit at the box office? Well, if anyone can, it’s Marvel, a franchise with an unprecedented 100 percent hit-rate at the box office; something unheard of when you’re talking about 20-plus titles released over only a dozen or so years.

A few things, though, should concern Marvel…Star Wars was once considered as bulletproof as Marvel. Marvel is no longer Marvel. What I mean is that the Iron Man/Captain America era is over. Come on, who the hell are the Eternals?

Finally, who wants to see this? Who is the audience for this?

Do parents want to expose their children to something that will result in a premature conversation about human sexuality? For 99 percent of kids, watching a man and woman smooch is normal. They think nothing of it. But when kids see two hairy guys get it on, all of a sudden the topic of human sexuality is on the table, a conversation your children might not be ready for. After all, good parents seek to protect their child’s innocence for as long as possible.

I’m certainly not the audience — I can tell you that. I’m not going to spend 150 minutes and ten bucks to sit there and wait to be uncomfortable. Who wants to sit around all tensed up “waiting for it?”

Yeah, yeah, I know we’re not supposed to express those kinds of thoughts out loud today; we’re supposed to remain quiet, or worse, pretend that as a red-blooded heterosexuals we are not made uncomfortable when two hairy guys become romantically intimate. Sorry, but the fascist thought police cannot change the fact that we are indeed made uncomfortable. And…

That’s not homophobia… That’s human nature. What’s more, it is also my own – if you will — sexual preference, and why am I not allowed to express my own personal sexual preferences,  which includes a desire to avoid watching two fellas neck?

And I tried. I swear I sat through all those 90’s indie movies… But this stuff has never failed to make me uncomfortable, and now I’m done trying because life is just too short. Listen, as I have said before, it is totally appropriate for Hollywood to make movies for gay audiences. Hollywood should make movies for everyone, and if they want to make a $250 million superhero blockbuster for gay people… Fine. I’m just not going to go see it. READ MORE