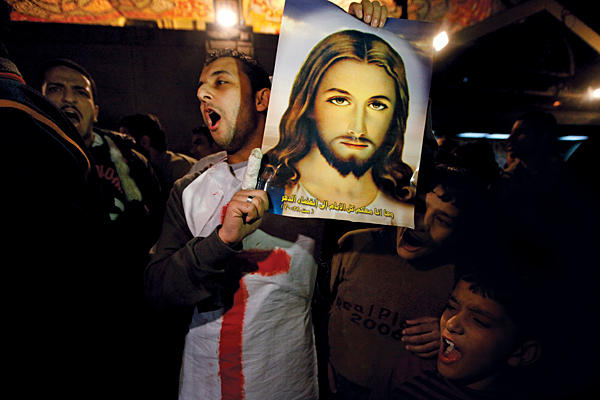 It is ever more common to see headlines about Christians being persecuted and brutally murdered all around the world, and who might you ask is perpetrating such violence? The answer is really quite clear if you are paying the slightest bit of attention to reality, but unfortunately, the truth is all but ignored by much of the media, and much of the world for that matter. It’s not even clear that very many Christians in America are all that bothered by the persecution of Christians in other nations. There is a deafening silence from the moderate Muslims, and the lines between the moderates and the extreme seem grow more and more blurry as the days go on.

Now here’s what you don’t need to imagine because it is all too real: In recent days, Christian churches have been bombed in Egypt, Iraq, Nigeria and the Philippines. In Indonesia a mob of 1,000 Muslims burned down two Christian churches. In Iran, scores of Christians have been arrested. In Pakistan, a Christian woman received the death penalty for the “crime” of insulting Islam; the governor of Punjab promised to pardon her – and was then assassinated for the “crime” of blasphemy.

[We] could provide dozens of additional examples of the persecution and, in many cases, “cleansing” of Christians in what we have come to call the Muslim world. If the situation were reversed, if such a war were being waged against Muslims, it would be the top story in every newspaper, the most urgent item at the United Nations, the highest priority of all the big-league human rights groups.

What we have instead is denial. source: Boston Herald

Jesus promised us that the world would hate Christians because of His name. “But all these things will they do unto you for my name’s sake, because they know not him that sent me.” John 15:21.

What Jesus told us regarding persecution can be a tough concept to grasp, but one that is imperative to keep at the forefront of our minds as we watch these events unfold. “Blessed are ye, when [men] shall revile you, and persecute [you], and shall say all manner of evil against you falsely, for my sake. Rejoice, and be exceeding glad: for great [is] your reward in heaven: for so persecuted they the prophets which were before you.” Matthew 5:11-12.