#MAGA2020: Thousands Of US Patriots Pack The National Mall In Washington DC For Massive Celebration of 243 Years Of American Independence

Twitter was aflame earlier with dozens and dozens of tweets trying to convince people that President Trump's Fourth of July celebrations were an abject failure with horrifically low attendance. But the fact is just the opposite was true. Tens of thousands of American patriots packed the National Mall to celebrate our 243rd birthday, and even a powerful summer rainstorm could not stop the president's speech in front of massive crowds.

It sent ice, cold chills down my spine while doing research for this article this evening. Why? Because when I searched on ‘trump fourth of july washington 2019‘ up came article after article written by Liberals journalists who did nothing but trash the president, trash our Independence Day celebration in Washington, and trash America. The Democrats don’t just hate Republican, and they don’t just hate Trump, they hate America and everything we stand for.

In my mind’s eye, scanning the search results was like watching that scene from ‘Frankenstein’ where the angry mob shows up with flaming torches and pitchforks, looking to steal, kill and destroy. It show me instantly that America’s real enemy is not Russia, China, Iran or even North Korea, not by a long shot. America’s real enemy is the Democratic Party, and they proved that in spades today.

Twitter was aflame earlier with dozens and dozens of tweets trying to convince people that President Trump’s Fourth of July celebrations were an abject failure with horrifically low attendance. But the fact is just the opposite was true. Tens of thousands of American patriots packed the National Mall to celebrate our 243rd birthday, and even a powerful summer rainstorm could not stop the president’s speech in front of massive crowds.

Pray for our president, I cannot possibly fathom the intensity and power of the dark forces that stand to oppose him and seek his destruction. Most of all, pray that Donald Trump receives Jesus Christ as his Saviour. Here now is the photographic evidence of exactly what type of crowd came out today to support President Trump. 2020 does not bode well for the Democratic Party, and they know it. Everything they have done to stop Trump has failed, they are getting desperate. Very desperate. Maybe even desperate enough to…

President Trump’s dream of a celebration showing off America’s military capabilities will become a reality on Thursday, as the president confirmed tanks will play a role in Washington, D.C.’s Fourth of July festivities — and the vehicles were seen being hauled in on a freight train.

In the shadow of the monuments and looming storms, crowds began streaming into D.C. for Fourth of July celebrations.

President Donald Trump tweeted that the weather was “looking good,” before heading toward the Lincoln Memorial to deliver a speech for the “Salute to America” portion of the festivities. The speech started around 6:30 p.m., right on schedule. As it rained on and off, Trump talked about the achievements of the country, starting from its founding. 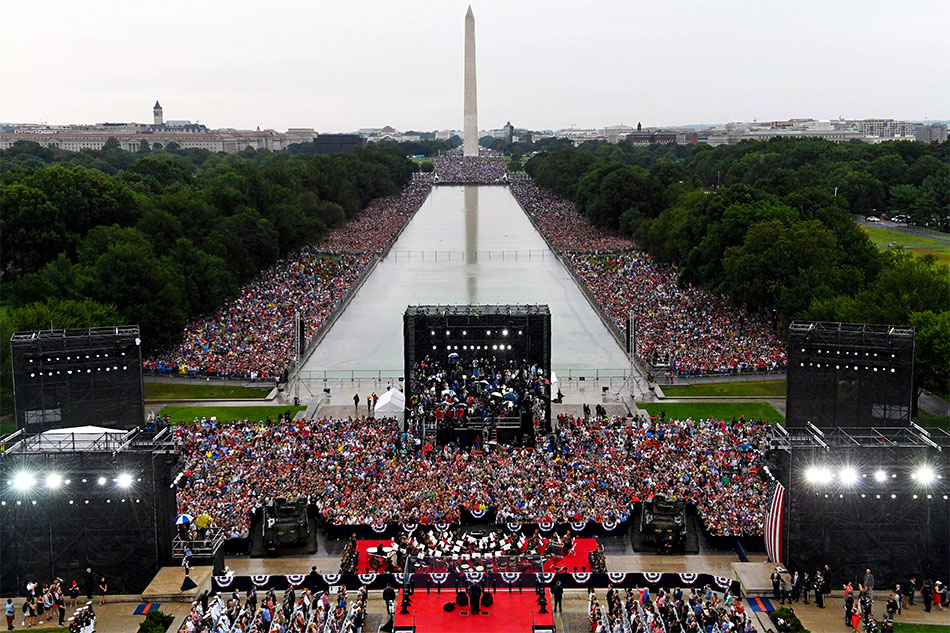 The crowd was large and some reports said it extended from the Lincoln Memorial to the Washington Monument.

In a statement, Secretary of Interior David Bernhardt said: “For the first time in many years, the World War II Memorial and areas around the Reflecting Pool will be open for the public to enjoy a stunning fireworks display and an address by our Commander-in-Chief. We are excited to open these new areas so that more visitors may experience this year’s Independence Day celebration in our nation’s capital.”

BREAKING: Crowd at #SaluteToAmerica event in Washington D.C. goes from the Lincoln Memorial all the way down to the Washington Monument, thousands of people there — President Trump to speak shortly#4thOfJuly pic.twitter.com/unxweznWWp

Salute to America is designed to honor the armed forces. Trump also delivered a speech on the steps of the Lincoln Memorial.

According to The Guardian, this was the first time a President gave a speech on Independence Day in nearly seven decades. Trump spoke for nearly an hour to an enthusiastic crowd. Military flyovers were also featured during the event, and people gathered to hear Trump despite the rainy conditions.

During his speech, Trump told the history of Independence Day and said the country is stronger than it’s ever been before, thanks to the American spirit. He spoke of the country’s many accomplishments and said: “As long as we stay true to our purpose… As long as we never stop fighting for a better future, there will be nothing that America cannot do.”

Fireworks at 4th of July Celebration in Washington, DC 2019

Thursday, July 4, 2019: National Mall & Neighboring Parks Independence Day culminates with a spectacular fireworks display launched from West Potomac Park and behind the Lincoln Memorial which will be visible from many locations throughout D.C. and Northern Virginia.