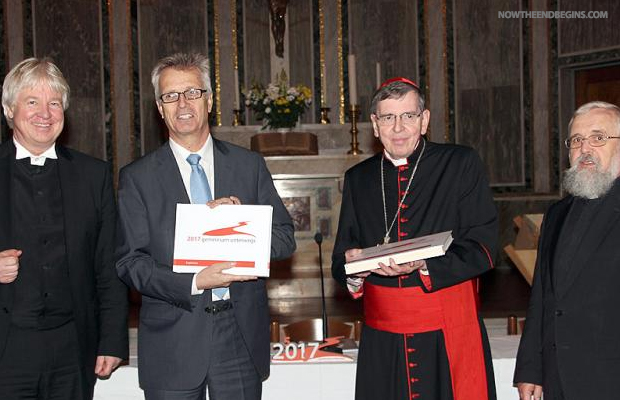 Pope Francis has issued the order to bring all the world’s religions into the Vatican tent, and this front-burner priority is being accomplished at a record pace. Emergent church leaders like Rick Warren, who says that Francis is “our Pope”, and prosperity “preacher” Joel Osteen have been on-board since last year after private meetings with the Pope. But this latest coupe is also a swipe against the very heart of the Protestant Reformation as well.

(Left to right) Bishop Dr Karl-Hinrich Manzke, LWF General Secretary Rev. Martin Junge, Kurt Cardinal Koch and Bishop Dr Gerhard Feige at the presentation of the results of the internet project “2017 – Together on the Way” in Rome. Photo: LWF-GNC/F. Hübner

Speaking during a panel discussion, held 18 December, in the Lutheran church in Rome, Junge emphasized that the relationship between Lutherans and Catholics was being transformed “from conflict to communion.” Precisely in a world “in which religion and faith are regularly portrayed and perceived as trouble makers,” he said it was a phenomenal testimony that the Lutheran and Roman Catholic churches continued to move “towards a profound communion that frees us to serve God and the world.” source -LWF

The One World Religion is be assembled as we watch, and all the key players will soon be in place for the time of the Great Tribulation when it will be in full bloom. Aren’t you glad that those of us who are saved get out of here in the Rapture before that time starts?