"We know that if we are joined by the international community, we can continue to shrink ISILl's sphere of influence, its effectiveness, its financing, its military capabilities to the... 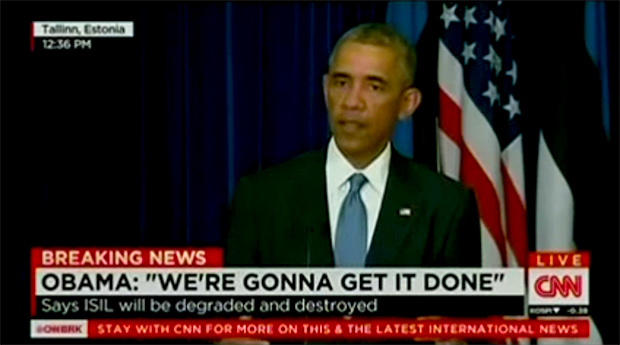 The president who wasn’t there gives dead, lifeless speech that no one believed

Listen to the passionless words coming out of his mouth, he doesn’t believe one, single word he is saying. Either he sparked a joint before he stepped in front of the camera, or he is just simply disgusted because he has to pretend to be defending America’s interests. He has become Zombie Obama in our American nightmare. I bet ISIS is shaking in their boots right about now. And he is still calling them ISIL, which is a real eye-opener when you read this.

Speaking earlier this morning in Estonia, President Obama addressed dealing with ISIS. He talked of making ISIS a “manageable problem” if the “international community” comes together:

“We know that if we are joined by the international community, we can continue to shrink ISILl’s sphere of influence, its effectiveness, its financing, its military capabilities to the point  where it is a manageable problem,” said Obama.

“And the question is going to be making sure we’ve got the right strategy but also making sure we’ve got the international will to do it. This is something that is a continuation of  a problem we’ve seen certainly since 9/11, but before and it continues to metastasize in different ways. And what we’ve got to do is make sure that we are organizing the Arab world, the Middle East, the Muslim world, along with the internationl community to isolate this cancer.

He brings no leadership of any kind to the table, and spends the entire clip waiting for the “international community” to come and save the day. For those of us who remember Ronald Reagan in the White House, this is simply intolerable.

“And they’re falling behind because of this very small and narrow but very dangerous segment of the population. And we’ve got to combat it in a sustained, effective way. And I’m confident we’re going to be able to do that.”