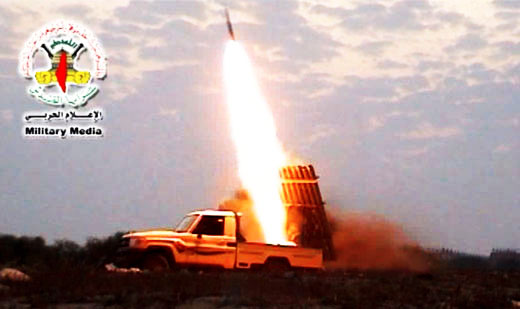 The rocket barrages fired from the Gaza Strip on Israel were launched using a multi-barrel rocket launcher,
by Geoffrey Grider November 11, 2011
NOW THE END BEGINS SHARE:

Fifty Libyan Muslim Brotherhood mercenaries arrived in the Gaza Strip from Tripoli last month – in time to take part in the Jihad Islami’s last missile offensive against Israel starting Oct. 29, debkafile’s military sources report. They arrived at the wheels of minivans on which were mounted the new Grad multiple rocket-launchers which Palestinian terrorists fired for the first time last month. These mobile rocket-launchers were last seen on the Libyan battlefield in use against Muammar Qaddafi’s army.

The rocket barrages fired from the Gaza Strip on Israel were launched using a multi-barrel rocket launcher,

The 50 mercenaries did not bother to paint over the Libyan national colors or replace the trucks’ Libyan license plates. Jihad Islami fighters kept them sequestered away from awkward questions about who sent them.

Gazan sources report the Libyan mercenaries left Tripoli on October 10 aboard two buses which drove them via Benghazi to Tobruk. They then entered Egypt as tourists.
On Oct. 21, the day Muammar Qaddafi was killed, they crossed the Suez Canal into the Sinai Peninsula.
The minivans mounted with the Grad multiple rocket launchers had been moved out of Libya by a separate route and were waiting in the care of Bedouin smugglers beside a Sinai wadi near the old copper mines of Ras Sudar. They looked quite new with no sign of having been in combat.

Our military sources report that, Qatar and the United Arab Republic had supplied these advanced rocket-launchers to assorted Libyan National Transitional Council militias, their accurate fire against designated targets intended to counter the precision of the Libyan army’s artillery.But their effectiveness was demonstrated most strikingly after Qaddafi’s fall in the Gaza Strip, where they instantly improved the Palestinian extremists’ aim against Israeli locations. Most of these rapid-firing missiles were also able to evade Israel’s Iron Dome missile interceptors. When the Palestinians reverted to their old weapons, they continued to miss their aim.

The Libyan convoy had to travel some 2,000 kilometers through Egypt to reach the Gaza Strip, raising questions about how it had failed to arouse the notice of local security units. Western sources discovered that the Egyptian Islamic Brotherhood had made all the necessary arrangements for the Libyan Brotherhood mercenaries’ long trek to Gaza under its protection, and more are on the way.

Furthermore, large sums of money would have been available to smooth their passage and that of the new Grads. Our intelligence sources report that Hamas and Hizballah arms purchasing missions worked out of Benghazi and Tripoli for seven months, buying hardware from rebel militias for hard cash. After Tripoli fell in late August, they split up between the two cities and are still snapping up black market arms sold by NTC militias. source – DEBKA