The killing fields Of all the uprisings going on in the Muslim world, the one in Libya is by far the most deadly, and the scariest. Libya has been... 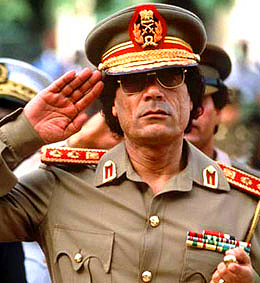 Of all the uprisings going on in the Muslim world, the one in Libya is by far the most deadly, and the scariest. Libya has been opening fire on it’s people to a very high degree – much higher than that of even Bahrain.

“Libya’s official name is the Jamahiriya, or “state of the masses”, but 41 years after seizing power, a defiant Muammar Gaddafi still rules through secretive decision-making and as a family enterprise in which his sons play leading roles. Now facing the worst unrest since the revolution, Gaddafi’s moves are as opaque as ever. Amid feverish speculation about the future, everything he has ever done suggests he will not relinquish power voluntarily. “We will all die on Libyan soil,” sources close to his family told the Saudi paper al-Sharq al-Awsat.

According to unconfirmed reports the repression in Benghazi in eastern Libya is being led by his son Khamis, the Russian-trained commander of an elite special forces unit. Another son, Saadi, is there too, with Abdullah al-Senussi, veteran head of military intelligence. Last Friday Gaddafi appeared briefly in central Tripoli to cheers from supporters but has not spoken in public or left the heavily-guarded Bab al-Aziziya barracks in the centre of the capital – the target of a US bombing raid in 1986. The crushing of protests in Benghazi and elsewhere bears the hallmark of his instinctive brutality when faced with challenges to his rule, analysts say. source – Guardian UK

The oil fields may stop flowing

TRIPOLI Feb 20 (Reuters) – The leader of the Al-Zuwayya tribe in eastern Libya threatened on Sunday to cut oil exports to Western countries within 24 hours unless authorities stop what he called the “oppression of protesters”. Speaking to Al Jazeera, Shaikh Faraj al Zuway said: “We will stop oil exports to Western countries within 24 hours” if the violence did not stop. The tribe lives south of Benghazi, which has seen the worst of the deadly violence in recent days. Akram Al-Warfalli, a leading figure in the Al Warfalla tribe, one of Libya’s biggest, told the channel: “We tell the brother (Gaddafi), well he’s no longer a brother, we tell him to leave the country.” The tribe live south of the capital Tripoli. (Reporting by Souhail Karam in Rabat; Writing by Marie-Louise Gumuchian; Editing by Jon Boyle) source – Reuters Africa