Liberals in America and abroad are horrified at the hunting death of Cecil the Lion in South Africa by American dentist Dr. Walter J. Palmer. Social media has lit... 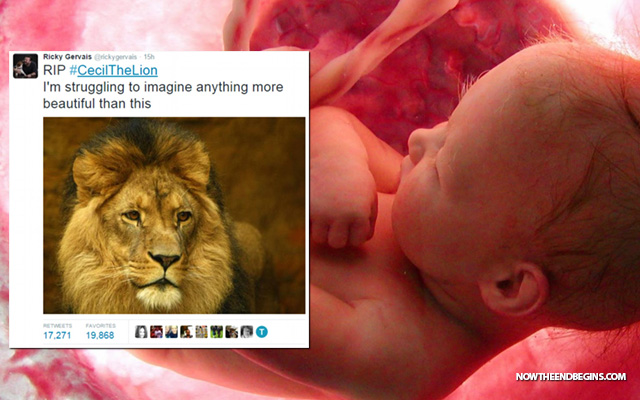 To a liberal, one lion’s life has more value than 327,653 human babies in their mother’s wombs.

Liberals in America and abroad are horrified at the hunting death of Cecil the Lion in South Africa by American dentist Dr. Walter J. Palmer. Social media has lit up in outrage over someone who would dare kill the beloved lion for sport. In the headlines today, Palmer is being lambasted as a “coward and a killer” and is receiving multiple death threats. PETA has said on it’s Twitter account that Palmer should “hang himself” for what he did. Wow, truly a hardcore reaction. But evidently, killing human babies is ok.

I am writing this article at 11:48 AM EST on July 29, 2015. Since midnight last night, 1,470 abortions were performed in America with 53, 983 performed worldwide. From the time that I started to type just this very sentence, 30 abortions have been completed with the blood still flowing from their mothers wombs. 30 dead babies in the time it took to write that one sentence! Yet, there is no liberal outrage, no calls for abortion doctors to “hang themselves”, no lit candles and stuffed animal memorials set up anywhere by liberals in any walk of life. Why not?

Late night talk show host Jimmy Kimmel, when discussing the fate of Cecil the Lion on his show last night, became so overwhelming with emotion that he actually cried on-air. I, too, think it’s a sad thing and I agree Cecil should never have been shot. If there was wrongdoing by the dentist, then he should have to explain that in a court of law. But why can’t liberals have this same kind of reaction at the slaughter of defenseless human beings? Listen as Jimmy Kimmel describes in great, graphic detail how Cecil was killed:

So, Jimmy Kimmel, if you are reading this, in the interest of equal time how about describing this on your show tonight?

The cervix must be dilated before the abortion. Usually Laminaria sticks are inserted into the cervix. These are made of sterilized seaweed that is compressed into thin sticks. When inserted, they absorb moisture and expand, thus enlarging the cervix.  A pliers-like instrument is inserted through the cervix into the uterus. The abortionist then seizes a leg, arm or other part of the baby and, with a twisting motion, tears it from the body. This continues until only the head remains.  Finally the skull is crushed and pulled out. The nurse must then reassemble the body parts to be sure that all of them were removed.

Since the time that I started to write this article at 11:48 AM EST on July 29, 2015, over 500 babies have been aborted worldwide. Where is the liberal outrage for that?