THE NEGRO PROJECT: Far Left Liberals Are Silent As It’s Shown The #1 Killer Of Blacks In America Is Planned Parenthood And Their Racist Agenda

On average, 1,876 black babies are aborted in abortion mills across America every day, with the majority of those abortions being performed by Planned Parenthood. It has been estimated that since 1973 black women have had about 16 million abortions. Current black population in the US is about 36 million, so the missing 16 million black babies means that without abortion, the black population would be 36% larger than what it is today.

Margaret Sanger’s ‘Negro Project’ is alive and well, with over 76% of all Planned Parenthood facilities located in the poorest, inner-city neighborhoods where there is a large black population.

On average, 1,876 black babies are aborted in abortion mills across America every day, with the majority of those abortions being performed by Planned Parenthood. It has been estimated that since 1973 black women have had about 16 million abortions.

“Colored people are like human weeds and are to be exterminated.”  – Margaret Sanger, founder of Planned Parenthood

Did you know that the founder of Planned Parenthood, Margaret Sanger, was a devout racist who created the Negro Project designed to sterilize unknowing black women and others she deemed as undesirables of society? The founder of Planned Parenthood said, “Colored people are like human weeds and are to be exterminated.” Is her vision being fulfilled today? Sure looks like it is.

“The most obvious practitioner of racism in the United States today is Planned Parenthood, an organization founded by the eugenicist Margaret Sanger and recently documented as ready to accept money to eliminate black babies” – Dr. Alveda King

In 1926, Sanger spoke at a meeting hosted by the women’s auxiliary of the Ku Klux Klan in Silver Lake, New Jersey. Following the invitation, Sanger describes her elation after receiving multiple speaking requests from white supremacy groups. She writes of the experience on page 366 of her book, An Autobiography:

“I accepted an invitation to talk to the women’s branch of the Ku Klux Klan … I saw through the door dim figures parading with banners and illuminated crosses … I was escorted to the platform, was introduced, and began to speak … In the end, through simple illustrations I believed I had accomplished my purpose. A dozen invitations to speak to similar groups were proffered.” 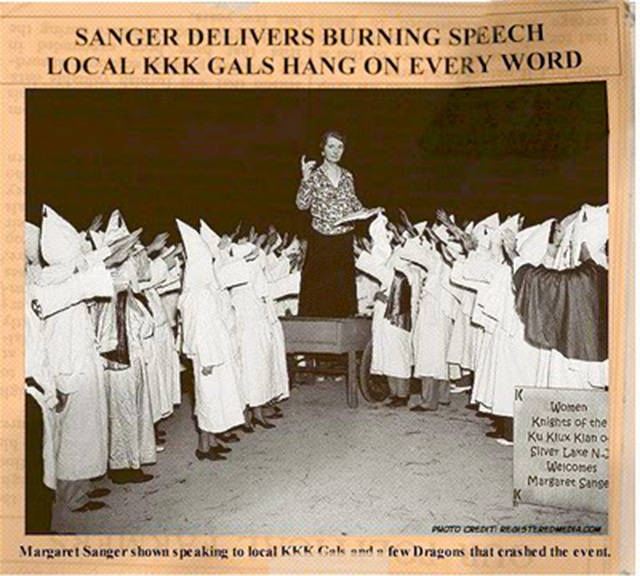 Like Adolf Hitler, Sanger believed strongly in a master race of humans, a white master race of genetically-superior humans to rule the planet. And the means by which this would accomplish is called Eugenics, the science of “weeding out” the inferior to  make room for the superior. Eugenics is just a fancy word for genocide. About this, Sanger said this:

“By all means, there should be no children when either mother or father suffers from such diseases as tuberculosis, gonorrhea, syphilis, cancer, epilepsy, insanity, drunkenness and mental disorders. In the case of the mother, heart disease, kidney trouble and pelvic deformities are also a serious bar to childbearing No more children should be born when the parents, though healthy themselves, find that their children are physically or mentally defective.” (“Woman and the New Race,” 1920, Chapter 7).

The Negro Project was initiated in 1939 by Margaret Sanger, founder of Planned Parenthood. It was a collaborative effort between the American Birth Control League and Sanger’s Birth Control Clinical Research Bureau. Her goal was to greatly reduce the growing population of black babies through birth control, sterilization and abortion. In her book, “The Pivot Of Civilization“, Sanger wrote that blacks were “…human weeds, reckless breeders, spawning… human beings who never should have been born.”

Sanger realized her need to cover her bases lest people got wise to what her true intentions were, and wrote this in 1939:

“It seems to me from my experience…that while the colored Negroes have great respect for white doctors they can get closer to their own members and more or less lay their cards on the table which means their ignorance, superstitions and doubts. We should hire three or four colored ministers, preferably with social-service backgrounds, and with engaging personalities. The most successful educational approach to the Negro is through a religious appeal. We don’t want the word to go out that we want to exterminate the Negro population, and the minister is the man who can straighten out that idea if it ever occurs to any of their more rebellious members.” Letter to Dr. Clarence Gamble, December 10, 1939 (read the whole letter here)

When you contribute to this fundraising effort, you are helping us to do what the Lord called us to do. The money you send in goes to the overall daily operations of this site. When people ask for Bibles, we send them out at no charge. When people write in and say how much they would like gospel tracts but cannot afford them, we send them a box at no cost to them for either the tracts or the shipping, no matter where they are in the world. Even all the way to South Africa. We even restarted our weekly radio Bible study on Sunday nights again, thanks to your generous donations.