Throughout 2013, the Christian couple and their business have been in the midst of a media firestorm after refusing to make a wedding cake for a lesbian couple.... 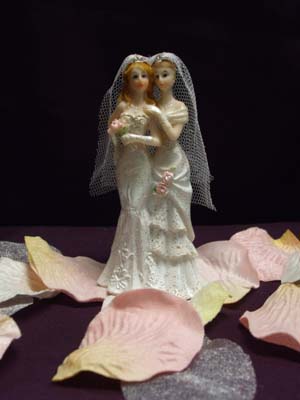 When I was a kid, local merchants used to have a sign in their stores that said this:

“We reserve the right to refuse service to anyone.”

That’s what you would expect in a free country, a merchant’s right to sell or not sell a product or service to whomever they chose to do or not do business with. But in Obama’s America 2013, the rights of the individual have little value. The rising gay army, while still less than 10% of the overall American population, having been empowered by Obama, are now dictating commands and barking orders to the remaining 90% of this country.

From The Blaze: Aaron and Melissa Klein, owners of Sweet Cakes by Melissa, an Oregon-based bakery have fallen under intense scrutiny. Throughout 2013, the Christian couple and their business have been in the midst of a media firestorm after refusing to make a wedding cake for a lesbian couple.

From threats to vicious phone calls and e-mails, the Klein family has been inundated with angry responses. Now, Aaron and Melissa have announced that they are shutting down their shop.

In a brief phone interview earlier this month, Melissa said that the couple has continued to face upheaval following their faith-based decision. Just days after we spoke, she and her husband announced that this past weekend was the family’s last at its current location.

The business will be transitioning, with the Kleins operating, instead, from their home.

“This will be our last weekend at the shop we are moving our business to an in home bakery,” read a post on the company’s Facebook page on Aug. 30.

On the same Facebook page just few days earlier, the family shared appreciation for the support the owners received in the wake of media coverage surrounding their cake-baking battle.

“Thank you again everyone for your up lifting words, and encouragement! It is much appreciated,”one message read.

It’s no secret that Sweet Cakes by Melissa has been struggling since Rachel Cryer and Laurel Bowman, the lesbian couple at the center of the debate, waged a complaint with the state over the cake debacle. In May, the bakers told TheBlaze that they were inundated with hateful messages.

From proclamations that Aaron should be shot to one apparent threat that he be raped, the hate and angst being thrown the Klein family’s way is certainly serious in nature. Some have even wished for the couple’s five children to be stricken with illness. Earlier this summer, Aaron and Melissa shared a number of these e-mails.

“You stupid bible-thumping, hypocritical b**ch.  I hope your kids get really, really, sick and you go out of business,” read one e-mail.

“Here’s hoping you go out of business, you bigot. Enjoy hell,” read another.

At the time, they said that their wedding vendors “badgered and harassed” until they refused to do business with Sweet Cakes by Melissa. As a result, the business’ wedding cake orders this summer were down dramatically from the past. Plus, some individuals canceled their previously-planned cakes in the wake of the controversy. source – Blaze