Dozens of police departments nationwide are gearing up to use a tech company's already controversial iris- and facial-scanning device that slides over an iPhone and helps identify a person... 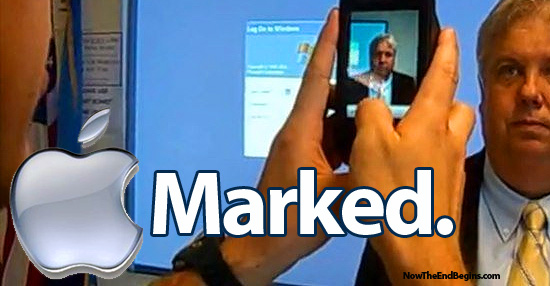 Recording your iris scan in a permanent International database? Yep, there's an app for that!
by Geoffrey Grider July 20, 2011
NOW THE END BEGINS SHARE:

The Mark of the Beast makes deeper inroads into everyday society

Conspiracy theory has gone mainstream, as evidenced by the following story from news authority Reuters. You may not realize it, but while you were sleeping, someone started to build the Mark of the Beast technology system, and maybe it’s time you woke up and took a look.

“(Reuters) – Dozens of police departments nationwide are gearing up to use a tech company’s already controversial iris- and facial-scanning device that slides over an iPhone and helps identify a person or track criminal suspects.

Recording your iris scan in a permanent International database? Yep, there's an app for that!

The so-called “biometric” technology, which seems to take a page from TV shows like “MI-5” or “CSI,” could improve speed and accuracy in some routine police work in the field. However, its use has set off alarms with some who are concerned about possible civil liberties and privacy issues.

The smartphone-based scanner, named Mobile Offender Recognition and Information System, or MORIS, is made by BI2 Technologies in Plymouth, Massachusetts, and can be deployed by officers out on the beat or back at the station.

An iris scan, which detects unique patterns in a person’s eyes, can reduce to seconds the time it takes to identify a suspect in custody. This technique also is significantly more accurate than results from other fingerprinting technology long in use by police, BI2 says.

When attached to an iPhone, MORIS can photograph a person’s face and run the image through software that hunts for a match in a BI2-managed database of U.S. criminal records. Each unit costs about $3,000.

Some experts fret police may be randomly scanning the population, using potentially intrusive techniques to search for criminals, sex offenders, and illegal aliens, but the manufacturer says that would be a difficult task for officers to carry out. Sean Mullin, BI2’s CEO, says it is difficult, if not impossible, to covertly photograph someone and obtain a clear, usable image without that person knowing about it, because the MORIS should be used close up.”  source – Reuters

Read more on the MARK OF THE BEAST…