The Lake Worth, Florida City Council allowed atheist Preston Smith to lead them in the opening prayer to Satan.... 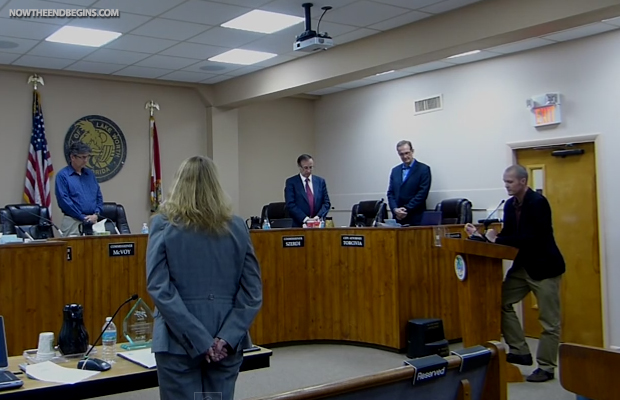 “For some are already turned aside after Satan.” 1 Timothy 5:15

The Lake Worth, Florida City Council allowed atheist Preston Smith to lead them in the opening prayer to Satan, and what a prayer it was. After giving permission for the prayer to be said, the Mayor and three commissioners walked out hypocritically walked out of the room before the name of Satan was invoked.

“Our collective atheism, which is to say loving empathy, scientific evidence and critical thinking, leads us to believe that we can create a better, more equal community without religious divisions,” Smith began. “May we pray together,” he continued:

“Mother Earth, we gather today in your redeeming and glorious presence to invoke your eternal guidance in the universe. The original creator of all things.

May the efforts of this council blend the righteousness of Allah with the all-knowing wisdom of Satan. May Zeus, the great god of justice, grant us strength tonight. Jesus might forgive our shortcomings, while Buddha enlightens us through his divine affection.”

This is not the only time the Lake Worth City Council has allowed this, it has happened multiple times as reported by CBS News 12.