Why Regularly Eating Pork Could Be Sabotaging Your Health (VIDEO)

Regardless of your spiritual beliefs, there may be good reason to carefully consider your decision to include pork as a regular part of your diet, because research suggests it... 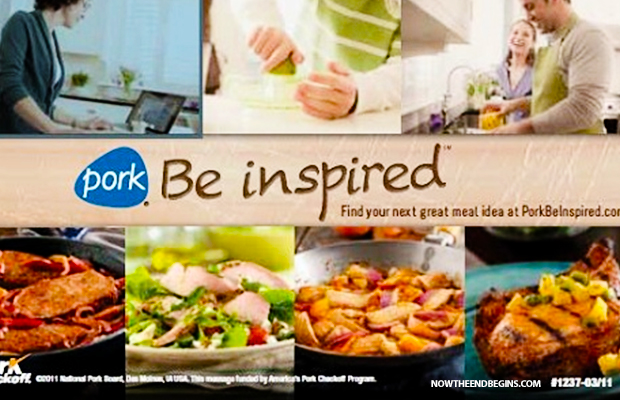 Growing up in a mostly secular Jewish home, mom did make bacon for the family. I loved it. When I married and had kids, one of their favorite meals was pork chops, mashed potatoes, vegetables and apple sauce.

“And there came a voice to him, Rise, Peter; kill, and eat. But Peter said, Not so, Lord; for I have never eaten any thing that is common or unclean. And the voice spake unto him again the second time, What God hath cleansed, that call not thou common.” Acts 10:13-15 (KJV)

EDITOR’S NOTE: When God in the New Testament lifted the Levitical ban on eating certain foods like shellfish and pork, that does not mean that items like pork are produced and processed in a healthy way in 2015. Renowned health researcher, Dr. Joseph Mercola, makes a compelling case why you should consider removing pork from you diet.

After doing my research for this article, I will never put pork near my mouth again…..and I mean never! For those of you who cannot live without your bacon, you probably should not continue reading. And just so everyone knows, I vetted this with reliable sources. So you pork deniers can’t say you were not warned!

My curiosity got the best of me last week, after I saw a disgusting video about pork. It showed pork chops taken out of the package and then Coke was poured over them. Disgusting little maggots made their way up to the surface of the raw pork.

According to a surprising new investigation by Consumer Reports, 69 percent of all raw pork samples tested — nearly 200 samples in total — were contaminated with the dangerous bacteria Yersinia enterocolitica, which causes fever and gastrointestinal illness with diarrhea, vomiting, and stomach cramps.

Now, I’m not sure that the video is not fake, but it did sent me on my quest for knowledge about pork consumption. First I went to mercola.com which has always been credible for all things medical. I was shocked as I began to read.

Regardless of your spiritual beliefs, there may be good reason to carefully consider your decision to include pork as a regular part of your diet, because despite advertising campaigns trying to paint pork as a “healthy” alternative to beef, research suggests it may be hazardous to your health on multiple levels. One of the most potentially acute hazards is contamination with pathogenic bacteria. According to a surprising new investigation by Consumer Reports, 69 percent of all raw pork samples tested — nearly 200 samples in total — were contaminated with the dangerous bacteria Yersinia enterocolitica, which causes fever and gastrointestinal illness with diarrhea, vomiting, and stomach cramps.

Ground pork was more likely than pork chops to be contaminated.
The pork also tested positive for other contaminants, including the controversial drug ractopamine, which is banned in many parts of the world, including China and Europe. The drug, which was found in more than 20 percent of the samples, is used to boost growth in the animal while leaving the meat lean. Worst of all, many of the bacteria found in the pork were resistant to multiple antibiotics, making treatment, should you fall ill, all the more problematic and potentially lethal.

According to the featured report:

“We found salmonella, staphylococcus aureus, or listeria monocytogenes, more common causes of foodborne illness, in 3 to 7 percent of samples. And 11 percent harbored enterococcus, which can indicate fecal contamination and can cause problems such as urinary-tract infections.”

While Nutritionally Sound, Pork is Probably Still Best Avoided
Pork is an arguably “healthy” meat from a biochemical perspective, and if consumed from a humanely raised pastured hog like those on Joel Salatins’ farm and prepared properly, there is likely minimal risk of infection. However, virtually all of the pork you’re likely to consume do not fit these criteria. [1] – source

Then I searched for more evidence. Surprisingly, someone had done a piece (no pun intended) on this subject on Psychology Today:

Did Leviticus get it right? Pork may still be dangerous. If we were to rank popular meats by their healthfulness, the order would be (1) fish and shellfish, (2) ruminants (beef, lamb, goat), and (3) birds (duck, chicken, turkey). In last place would be pork.

Of course, the ancient Hebrews were forbidden to eat pork, and it’s commonly assumed that health concerns were behind the prohibition. Commenter George Henderson prompted us to look into the modern case for avoiding pork with this comment:  “Nanji and Bridges identified possible problems with pork plus moderate alcohol in 1985 and other researchers have confirmed the pattern since.”

Pork consumption has a strong epidemiological association with cirrhosis of the liver. Startlingly, pork may be even more strongly associated with alcoholic cirrhosis than alcohol itself!

The evidence was summarized by Francis Bridges in a recent (2009) paper building on earlier work by Nanji and French. A relation between pork consumption and cirrhosis of the liver is apparent across countries and has been consistently maintained for at least 40 years.

Here is the relation between alcohol consumption and mortality from liver cirrhosis: The correlation coefficient is lower than for pork consumption. In epidemiological studies, beef, lamb, and pork are often grouped together as “red meat.” However, this may conceal differences between pork and the ruminant meats. Bridges found that beef actually appeared protective against cirrhosis:

In the present study using 2003 data, a significant negative association between dietary beef and rates of cirrhosis mortality was found. Dietary beef may be a protective factor regarding the parthenogenesis of alcoholic cirrhosis.

But fat composition is hardly likely to be the sole issue with pork. Most polyunsaturated fats in modern diets are derived from vegetable oils, not pork. It seems that there must be something else in pork besides polyunsaturated fat that is causing liver disease.

We would expect that if pork can cause liver cirrhosis it will also promote liver cancer, since injured and inflamed tissues are more likely to become cancerous. Indeed, there is an association between pork consumption and the primary liver cancer, hepatocellular carcinoma.

As noted earlier, a correlation coefficient of 0.87 is extremely high, and a p-value below 0.001 also shows a very strong relationship. MS is much more likely to befall pork eaters. Such a strong correlation makes it look like pork, or something found in pork, is the cause of MS.

Lauer verified the pork-MS link, but found it to be characteristic of processed pork: When quantitative data are taken into account, and a combined factor “smoked meat” or “smoked pork” is formed, the association is very high throughout. This factor is also compatible with the high risk of multiple sclerosis in Scotland and particularly in the Orkney and Shetland Islands and with the only transitorily high incidence in the Faroe Islands, whereas coffee can hardly explain both epidemiological features. Arguments for the biological plausibility of some agents occurring in smoked and cured meat (in particular nitrophenol haptens and their protein conjugates) have been put forward. There appears at present to be no plausibility for the factor “margarine”, which was also not compatible with the temporal pattern of multiple sclerosis in the Faroe Islands.

Conclusion: There are remarkably strong correlations between pork consumption and liver disease, liver cancer, and multiple sclerosis. What can be behind those relationships? The relatively high omega-6 fat content of pork may be a contributing factor, but it can’t be the whole story. It seems there is something else in pork that makes pork consumption risky. [2] – source

So, as for me and my house, we will never eat pork again. This has nothing to do with being under the law. It has everything to do with not wanting to eat food that makes us sick!