Did You Know About The ISIS That’s Headquartered In Washington DC?

ISIS provides worldwide security, intelligence, technology and training to government and private enterprises in the Middle East, and located in the Ronald Reagan Building in Washington, D.C.... 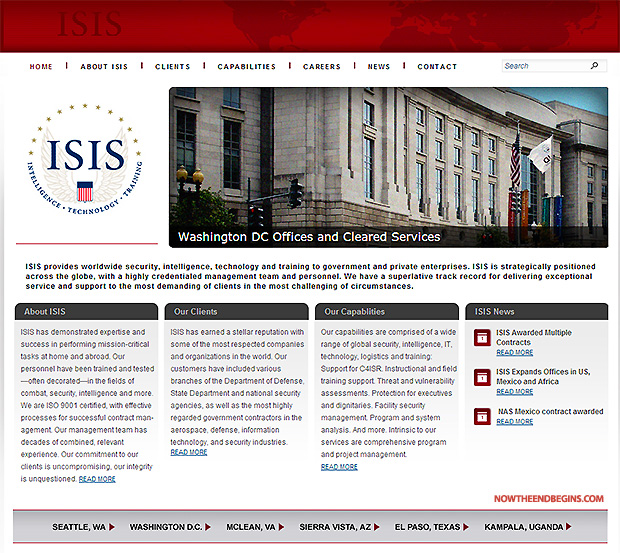 ISIS is operating in the Middle East, Europe, Asia and Africa in the protection of U.S. national interests

“Surely the Lord GOD will do nothing, but he revealeth his secret unto his servants the prophets.” Amos 3:7

Buried deep within the secretive recesses of Washington, DC, there is a para-military organization that provides intelligence, IT, technology, combat support, logistics and training for the United States government primarily in the Middle East. Do you find it odd at all that the name of this company is ISIS?

ISIS provides worldwide security, intelligence, technology and training to government and private enterprises in the Middle East, and located in the Ronald Reagan Building in Washington, D.C. – Click image to visit website.

From their website: “ISIS is is located in the Ronald Reagan Building  in Washington D.C. . We are dedicated to supporting our national defense and security departments, as well as government contractors and private business, with mission-critical services performed by highly skilled experts in their fields. ISIS professionals can be found working side by side with the U.S. Armed Forces, U.S. Government and Prime Contractors on the ground in such strategic environments as the Middle East. The members of our management team have extensive industry experience, supervising, managing and serving on numerous OGA contracts operating in the Middle East, Europe, Asia and Africa in the protection of U.S. national interests.”

So the question that begs being asked is this. Is the ISIS that is located in Washington, D.C. responsible for creating the ISIS that is currently operating in the Middle East? If there was no connection between these two groups at all it would be astonishing to say the least. A quick glance at the Washington ISIS client list reads like a WWIII Who’s Who:

The ISIS located in Washington seems to be highly concentrated on carrying out training missions in Northern Iraq. They also seem to be operating at some of the highest levels of government and defense. Just something to think about.

One more thing. This week, US Defense Secretary Chuck Hagel warned Thursday that the Islamic State is more than a traditional “terrorist group” and better armed, trained and funded than any recent threat. “They marry ideology and a sophistication of strategic and tactical military prowess. They are tremendously well funded. This is beyond anything we have seen,” Hagel told reporters.

How did the ISIS located in the Middle East come to acquire their “sophisticated strategic and tactical military prowess”  in such a short period of time? Well, that’s exactly the menu of services provided on the website for the ISIS located in Washington, D.C.