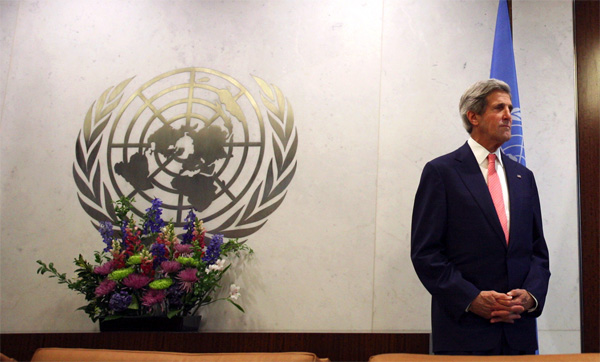 From Fox News: Secretary of State John Kerry plans to sign a controversial U.N. treaty on arms regulation on Wednesday, a senior State Department official told Fox News — despite warnings from lawmakers that the Senate will not ratify the agreement.

A State official said the treaty would “reduce the risk that international transfers of conventional arms will be used to carry out the world’s worst crimes,” while protecting gun rights.

“The treaty builds on decades of cooperative efforts to stem the international, illegal, and illicit trade in conventional weapons that benefits terrorists and rogue agents,” the official said.

U.S. lawmakers, though, have long claimed that the treaty could lead to new gun control measures. Sen. Jim Inhofe, R-Okla., one of the most vocal opponents of the treaty, sent a letter to Kerry declaring it “dead in the water,” since a majority of senators has gone on record against the agreement.

“The administration is wasting precious time trying to sign away our laws to the global community and unelected U.N. bureaucrats,” he wrote. Kerry, who is in New York attending the U.N. General Assembly session, announced earlier this year that the administration planned to sign the treaty.

The treaty would require countries that ratify it to establish national regulations to control the transfer of conventional arms and components and to regulate arms brokers, but it will not explicitly control the domestic use of weapons in any country.

Still, gun-rights supporters on Capitol Hill warn the treaty could be used as the basis for additional gun regulations inside the U.S. and have threatened not to ratify. Over the summer, 130 members of Congress signed a letter to President Obama and Kerry urging them to reject the measure for this and other reasons.

The chance of adoption by the U.S. is slim. A two-thirds majority would be needed in the Senate to ratify.

What impact the treaty will have in curbing the estimated $60 billion global arms trade remains to be seen. The U.N. treaty will take effect after 50 countries ratify it, and a lot will depend on which ones ratify and which ones don’t, and how stringently it is implemented.

The Control Arms Coalition, which includes hundreds of non-governmental organizations in more than 100 countries that promoted an Arms Trade Treaty, has said it expects many of the world’s top arms exporters — including Britain, Germany and France — to sign alongside emerging exporters such as Brazil and Mexico. It said the United States is expected to sign later this year.

The coalition notes that more than 500,000 people are killed by armed violence every year and predicted that “history will be made” when many U.N. members sign the treaty, which it says is designed “to protect millions living in daily fear of armed violence and at risk of rape, assault, displacement and death.”

Many violence-wracked countries, including Congo and South Sudan, are also expected to sign. The coalition said their signature — and ratification — will make it more difficult for illicit arms to cross borders.

It prohibits states that ratify it from transferring conventional weapons if they violate arms embargoes or if they promote acts of genocide, crimes against humanity or war crimes. The treaty also prohibits the export of conventional arms if they could be used in attacks on civilians or civilian buildings such as schools and hospitals.

In addition, the treaty requires countries to take measures to prevent the diversion of conventional weapons to the illicit market. This is among the provisions that gun-rights supporters in Congress are concerned about. source – Fox News