State officials say the preparations needed for a fictional zombie attack are a good exercise for the natural disasters that could actually hit Kansas in the near future. The... 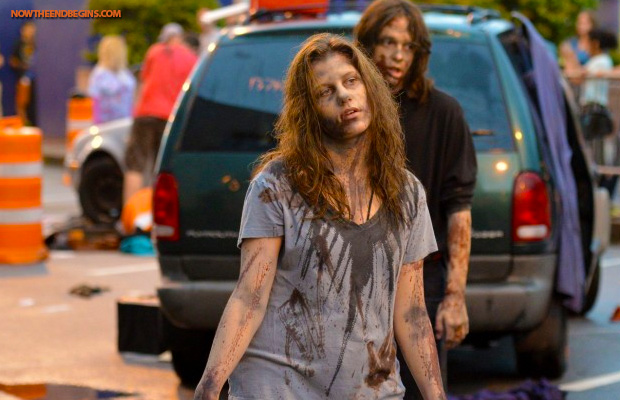 Kansas Gov. Sam Brownback wants his state to be ready when zombies arrive

“And in those days shall men seek death, and shall not find it; and shall desire to die, and death shall flee from them.” Revelation 9:6

The world around us is turning dark, and is preparing itself for what the prophet Jeremiah in the bible calls the “time of Jacob’s trouble”, otherwise known as the Great Tribulation from Matthew 24. After the Rapture of the Church takes place, those left behind will indeed deal with many horrific things, including dealing with the undead zombies in Revelation 9. But you don’t have to experience any of that mess if you will click here and get prepared.

Whatever you do, don’t be left behind.

Zombie Preparedness Month, however, is not actually about planning a defense for viral reincarnate flesh eaters. Instead, Brownback’s administration wants to capitalize on pop culture’s zombie obsession to raise awareness about disaster planning and response.

State officials say the preparations needed for a fictional zombie attack are a good exercise for the natural disasters that could actually hit Kansas in the near future. The agency is calling on Kansans to devise a survival plan that they could implement in the unlikely event that a horde of zombies descends upon the Sunflower State. Five of the best entries will be highlighted during “Zombie Preparedness Day” on Oct. 25, an event that will take place in Topeka.

“If you’re equipped to handle the zombie apocalypse, then you’re prepared for tornadoes, severe storms, fire, and any other natural disaster Kansas usually faces,” said Devan Tucking, a Human Services Officer with the Kansas Division of Emergency Management.

And Kansas isn’t the only place preparing for the arrival of the living dead. In Virginia, Northern Virginia Community College is planning an event Thursday where zombie look-alikes will swarm the campus sharing tips with students about how to plan for disaster.