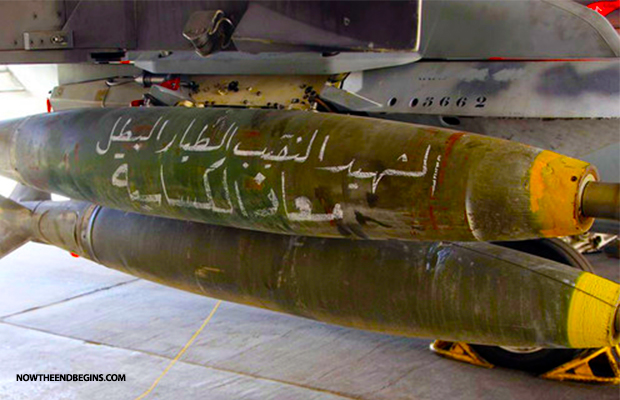 Bombs are pictured on a Royal Jordanian Air Force plane at an air base before it’s launch to strike ISIS in the Syrian city of Raqqa February 5, 2015. (Reuters)
by Geoffrey Grider February 9, 2015
NOW THE END BEGINS SHARE:

The Islamic State of Iraq and Syria (ISIS) group has lost 20 percent of its military capabilities since the start of U.S.-led coalition air strikes in September, General Mansour Al-Jbour, head of the Royal Jordanian Air Force, said in a press conference on Sunday.

Jordan has carried out nearly 20 percent of the total sorties conducted by the U.S.-led coalition against ISIS in Syria to date, Jbour said, adding that they had been careful not to hit any civilians.

Bombs are pictured on a Royal Jordanian Air Force plane at an air base before it’s launch to strike ISIS in the Syrian city of Raqqa February 5, 2015. (Reuters)

The sorties have led to the “degrading” of nearly 20 percent of the hardline militants’ capabilities, he said. “We are determined to wipe them from the face of the Earth.”

Jbour also said that the coalition’s air strikes have killed 7,000 members of the militant group.

He also said that Jordan’s jet fighters had conducted 56 raids in three days of intensified bombing targeting a stronghold of ISIS militants in northeast Syria.

“We achieved what we aimed at. We destroyed logistics centers, arms depos and targeted hideouts of their fighters,” Jbour said.

There was no word of any new strikes against the militants on Sunday.

Jordan’s King Abdullah has vowed to avenge the killing of pilot Muath al-Kassasbeh and has ordered his commanders to prepare for an increased military role in the U.S.-led coalition against ISIS.

Many Jordanians fear being dragged into a conflict that could trigger a backlash by hardline militants inside the kingdom.