Secretary of State John Kerry sketched out a plan on Sunday to spur Palestinian growth with up to $4 billion in private investment, but did not say where the... 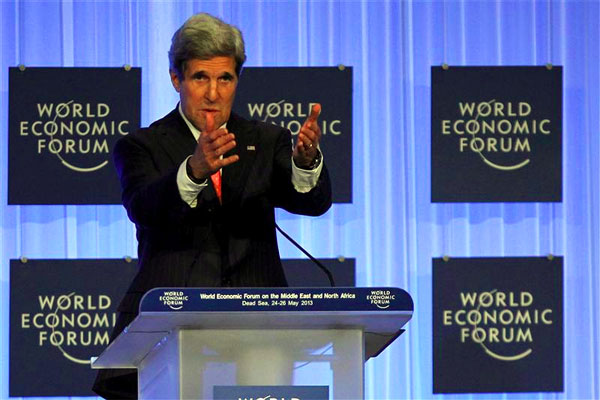 (Reuters) – Secretary of State John Kerry sketched out a plan on Sunday to spur Palestinian growth with up to $4 billion in private investment, but did not say where the money would come from.

Kerry drew a picture of prosperity in the West Bank that could spread to Israel and Jordan, while acknowledging it would not fully materialize without movement toward peace between Israel and the Palestinians.

Despite deep skepticism in the region, Kerry is trying to revive negotiations after a gap of more than two years and has said both sides must decide soon whether they are ready to make compromises for peace.

While stressing his vision of an economic renaissance was not a substitute for negotiations, the U.S. diplomat appeared to hold out the prospect of rising growth, wages and employment as a way to build trust and provide an incentive to make peace.

“Is this a fantasy? I don’t think so, because there are already great examples of investment and entrepreneurship that are working in the West Bank,” he said at a World Economic Forum on the Middle East and North Africa session with Palestinian President Mahmoud Abbas and Israeli President Shimon Peres.

But Kerry did not identify specific companies with plans to set up shop in the West Bank or how he hoped to remove obstacles to Palestinian commerce.

Their preliminary studies suggest that Palestinian gross national product could rise by as much as 50 percent over three years, with unemployment falling by nearly two thirds to eight percent and wages rising up to 40 percent.

On April 9, Kerry had said he would unveil the initiative in mid-April, saying he, Israeli Prime Minister Benjamin Netanyahu and Abbas had agreed to undertake “new efforts, very specific efforts” to promote economic development and to remove “bottlenecks and barriers” to commerce in the West Bank.

The U.S. secretary of state did not provide details on easing such obstacles. Among the main impediments are Israeli restrictions on the movement and access of Palestinians as they seek to travel among their communities on the West Bank, according to a September 2012 United Nationsreport.

Among the main issues to be solved to end the conflict are borders, the fate of Palestinian refugees, the future of Jewish settlements on the West Bank and the status of Jerusalem.

Kerry acknowledged the deep doubts among Palestinians and Israelis that peace is possible.

“I have heard all the arguments against working for Middle East peace. It is famously reputed to be diplomatic quicksand,” he said. “There is huge cynicism about this journey … but cynicism has never built anything, certainly not a state.”

At one point, he directly challenged the Palestinian and Israeli leaders, saying he hoped Netanyahu and Abbas “don’t allow this conflict to outlast their administrations.

“Negotiations can’t succeed if you don’t negotiate.” He began his speech on a lighter note.

“I have an agreement right here if you want to sign it,” Kerry joked with Abbas and Peres, who were both in the audience. “We’ll get there. We’ll get there.” source – Reuters