Joe Biden Keeps Telling You About The Coming ‘Dark Winter’, Did You Know That Phrase Is Connected To Event 201 And The COVID-1984 Plannedemic?

What is very interesting is one of the players involved who we’ve heard much about in recent months, Johns Hopkins. The John Hopkins Center for Civilian Bio defense Strategies were one of the designers and controllers of the Dark Winter simulation. What a coincidence, they were also part of Event 201, the simulation back in October 2019 of a global pandemic of a coronavirus. Now that two phrases to come out of the Joe Biden team have been used repeatedly, we should take notice. As reported earlier, Build Back Better was taken from the United Nations. Now “dark winter” of all things is being used to warn us of the next covid-19 second wave. Are we being warned because our eyes are open?

Operation “Dark Winter” was a military simulation of a bio-terrorist attack on the United States, and one of the main players in this end times intrigue was Johns Hopkins. Yes, the very same Johns Hopkins that was also a major player in Bill Gates’ ‘Event 201’. Joe Biden has been dropping the phrase ‘dark winter’ constantly in recent days, starting to see the connection?

EDITOR’S NOTE: Now The End Begins was one of the very first media outlets anywhere in the world to show you the connection between Bill Gates, Event 201, Johns Hopkins and the COVID-1984 global plannedemic. Now here in the end on 2020, presumptive president-elect Joe Biden has been constantly repeating the phrase ‘dark winter’, an expression that upon further discovery brings you right back to Bill Gates and Event 201. Is this the next chapter in the COVID-1984 end times scenario?

These are the end times where there are no coincidences and things just don’t happen by accident. Take, for example, the Joe Biden campaign slogan of ‘Build Back Better’, a phrase that was crafted by the United Nations and the New World Order, long before Joe Biden started using it. So why did he start using it, and why is he now talking about a ‘dark winter’? I will tell you why. The global elites who brought you Event 201 and COVID-1984 and preparing you for the next step – forced vaccinations. Dark winter? You have no idea. Forced lockdowns, mandatory vaccinations, human implantable Immunity Passports, and something that will send you out of the room running when you understand what it is – the ‘green zone shielding scenario’ that takes place inside your own home.

A connection we all need to be paying attention to is this, the CDC and something called the ‘shielding approach’.

What is very interesting is one of the players involved who we’ve heard much about in recent months, Johns Hopkins. The John Hopkins Center for Civilian Bio defense Strategies (CCBS) were one of the designers and controllers of the Dark Winter simulation. What a coincidence, they were also part of Event 201, the simulation back in October 2019 of a global pandemic of a coronavirus. Now that two phrases to come out of the Joe Biden team have been used repeatedly, we should take notice.

As reported earlier, ‘Build Back Better’ was taken from the United Nations. Now “dark winter” of all things is being used to warn us of the next covid-19 second wave. Are we being warned because our eyes are open? Yes, because propaganda like this only works on an uneducated populace. So much of the United States is asleep, doesn’t do their own homework, and scariest of all does not know American history.

EVENT 201: COVID-19 WAS LAUNCHED ONE MONTH AFTER THE JOHNS HOPKINS CENTER AND BILL GATES HOSTED AN ‘INVITATION ONLY’ GLOBAL PANDEMIC EXERCISE

A connection we all need to be paying attention to is this, the CDC and the shielding approach. On the CDC website it outlines what potentially could happen. In their Interim Operational Considerations for Implementing the Shielding Approach to Prevent Covid-19 Infections in Humanitarian Setting, it describes “green zones” to reduce cases by limiting contact between individuals. When you look into the summary of their approach you find they refer to a report by Caroline Favas from the Health and Humanitarian Crisis Centre in London. The name of her report? Wait for it. Guidance for the prevention of Covid 19 infections among high-risk individuals in camps and camp-like settings.

Here is a diagram of “green zones” that could be implemented to begin the shielding approach. Notice Option 3 – Sector-level states “no movement outside the green zone”. 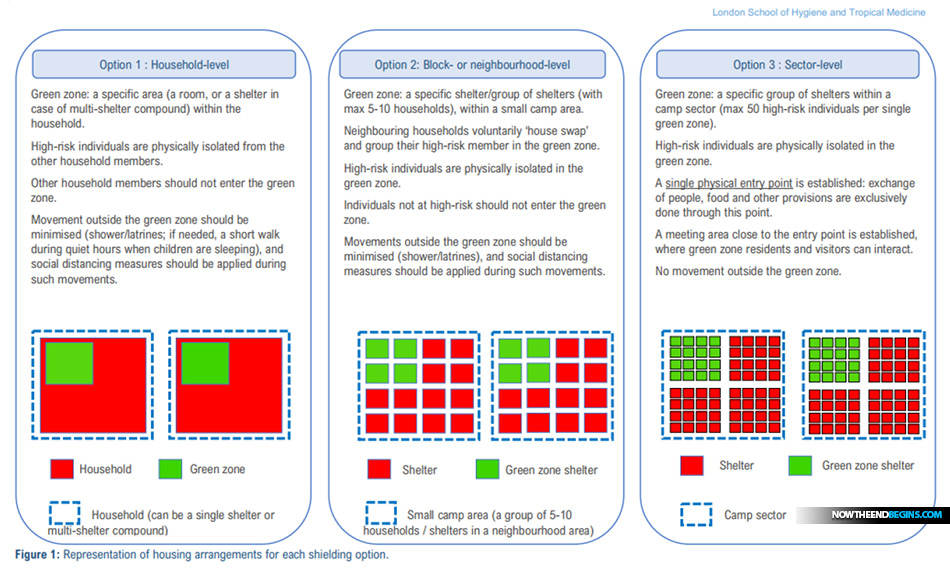 It states on sector level 3 the results of isolation, “risk of poor adherence (adjustment) due to isolation and separation from family members.” This approach is right on the CDC website and refers that they would use this model. Being in lockdowns and having to wear a mask sounds pretty good compared to a “camp-like setting” about now.

Is there a connection between hearing a “dark winter” is coming and the simulation back in 2001 and the CDC adding in March 2020 the shielding approach as an option?

There’s been many movie plots depicting this scenario, maybe predicatively programming everyone for what lies ahead. Here are two examples right on the Operation Dark Winter wiki page under the Popular Culture section, Tom Clancy’s The Division, a role-playing game in a world pandemic set in Manhattan. The mission is to restore order by finding the source of the virus.

The outbreak happens on black Friday 2015, and the virus is transmitted by paper currency hence given the name “The Dollar Flu”. Causing widespread chaos and major cities are placed under quarantine. The U.S. Government activates the National Guard and a joint task force to restore order. When the virus is tested by researchers they find it was manufactured and later modified. A sequel to the game features the USA under total anarchy in Washington D.C. six months after the outbreak.

A movie based on this game is in production to be released on Netflix. The Division was said to be out in late 2020 or 2021. But strangely enough filming in New York city where the story takes place with a virus pandemic has been delayed by an actual virus pandemic. Another example based on the dark winter scenario is the book, I Am Pilgrim by Terry Hayes. A thriller that involves a vaccine-resistant virus. The rights to make the book into a film were bought by MGM but has not been released as of yet.

WARNING: I CAN NO LONGER SAY THAT BILL GATES PLANNED GLOBAL VACCINATIONS AND THE ID2020 DIGITAL IDENTIFICATION ARE NOT THE MARK OF THE BEAST

CNN conducted a special in 2002 covering bioterror and health facilities. The name of this special? Dark Winter and lack of USA Preparedness, Is Your City Ready? It discussed the possibility of the spread of germs before symptoms appear and how we are under-prepared to handle a widespread outbreak. A survey by CNN in 2002 found 22 states didn’t have a CDC epidemic officer. They also pointed to the fact that public health veterinarians are needed due to the possible bio-agents transmission through animals. That sounds awful familiar. The connection between the CDC and the dark winter operation is that both do not rule out using mandatory quarantine measures to stop the spread of disease. In the dark winter report is says quote, “Federal officials argued that such issues (mandatory vs. voluntary isolation) were best decided on a national basis to ensure consistency and the give the President maximum control of military and public-safety assets”.

There is also a section regarding “dealing with the media”. Mind you, this was back in 2001, before the media was being manipulated and censored. If you remember, Event 201 also had planned how to strategically deal with the control of information coming from media outlets. The Dark Winter report states that information management will be a critical element in handling the crisis. And points out the following:

“For example, participants worried that it would be possible to forcibly impose vaccination and travel restrictions on large groups of the population without their general cooperation. To gain that cooperation, the President and others recognized the importance of persuading their constituents that there was fairness in the distribution of vaccine and other scarce resources. The disease-containment measures were for the general GOOD OF SOCIETY.”

Interesting that fairness and good of society have been used a lot these past months. How to deal with the resistance of those who do not want to take a Covid vaccine has also been discussed. If this was planned by the Dark Winter exercise for future use, well that future seems to be near. Dealing with ethical and legal challenges were addressed as well. Some of those participating in Dark Winter suggested that using such draconian measures such as geographic quarantines may or may not lead to stopping the spread, and using this method would be met with some cultural, ethical, and legal challenges.

However, if the President would have complete power to use these measures and as they point out could persuade the public to obey, our government could control our lives in such an outbreak that pales in comparison to what we’re witnessing now.

Lori and her family live in the Philadelphia area where she works as a Behavioral Health TSS. Their oldest daughter, Leah, was diagnosed with Autism Spectrum Disorder when she was 2 years old. Her articles have been published in Spectrums Magazine, The Autism Notebook Magazine, SEN Magazine, Autism Matters, Autism World Magazine, Autism Parenting Magazine, and Autism Spectrum Quarterly. She serves as a parent consultant with PEAC - The Pennsylvania Education for All Coalition, an organization that supports inclusive classroom placement for special needs children, and also on The Walnut Street Theater Education Advisory Committee. She is the recipient of the 2014 Temple Grandin Outstanding Literary Work of the Year Award for her book, Leah's Voice.