According to Joe Biden, the American Bible believing Christian who takes the Bible literally, is violating the "rights" of the LGBT by trusting in God's word. And this is why old-fashioned preaching will soon be classified as a "hate crime". Because Liberals can't stand it. Biden is also saying that the rights of the Christian are inferior to the rights of the LGBT individual.

Vice President Joe Biden said today that the rights of the LGBT people are violated by “religious condemnation”. He is directly referring to Bible verses like the one posted at the top of this article. The Progressive Liberals are well aware that it is God, speaking by the Holy Spirit through the Bible, that condemns homosexuality in all its many forms.

According to Joe Biden, the American Bible believing Christian who takes the Bible literally, is violating the “rights” of the LGBT by trusting in God’s word. And this is why old-fashioned preaching will soon be classified as a “hate crime”. Because Liberals can’t stand it. Biden is also saying that the rights of the Christian are inferior to the rights of the LGBT individual. 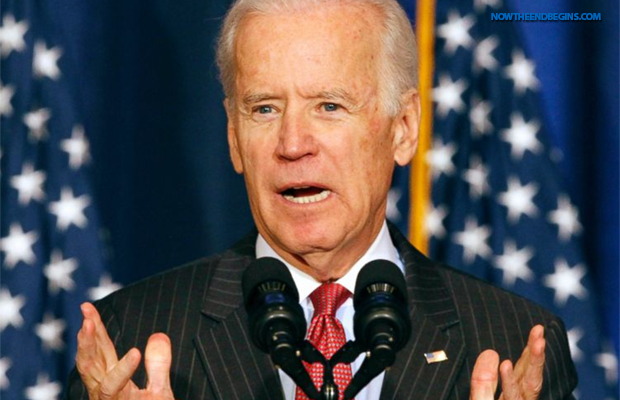 “And she named the child Ichabod, saying, The glory is departed from Israel:” 2 Samuel 4:21 (KJV)

Here is the full transcript of his remarks:

My father taught me the simple notion that everyone, everywhere is entitled to be treated with dignity and respect. When it comes to LGBT people, that simple proposition has been painfully difficult to accomplish over the years. But in the last decade, thanks to the astounding bravery of the LGBT community and those who have championed their cause, the United States has made remarkable progress toward the ultimate goal of equality in law and in life. Our progress remains incomplete, but the momentum has shifted in the right direction.

Progress has also been made in many places around the world. But in too many places, life for lesbian, gay, bisexual, and transgender individuals is actually getting worse. In too many places, LGBT community members face violence with impunity, mistreatment by police, the denial of healthcare, or religious condemnation and social isolation.

The best mechanism to confront this hatred is to speak up in favor of universal human rights. Supportive voices must be heard. Today and every day, let us continue to defend the rights of LGBT people, whether from nearby cities or far-off villages. We cannot rest until everyone receives the dignity, respect, and equal treatment under the law that all people deserve. source

There is no such thing as same-sex marriage, anymore than say a man marrying his dog would constitute a wedding. Sleeping in your garage does not make you a car. There is not one example in the Bible of God supporting, at any time, anything having to do with homosexuality. Churches that perform gay marriage ceremonies do it completely outside the blessing of God, and indeed bring down the wrath of God. The mark of Ichabod gets carved into the doorposts of every church that supports the LGBT movement.

Obama’s America, with it’s sky-high abortion rates, free-flowing 24 x 7 gambling, legalized pot, rampant drug and alcohol abuse, and now as the champion of the LGBT Movement, is rapidly becoming everything that the Bible says God hates.

Just the other day I was verbally assaulted and attacked by a vicious lesbian who said that “had no right” to my beliefs, and that this website was “hate speech”. Kinda funny, though, that she said this while all the while demanding that I respect her “right” to be gay. What about my right to believe and follow the Bible? Apparently, I am not entitled to my rights. And this is exactly why Biden’s remarks today should be taken very seriously. As we have always told you and will continue to tell you, the LGBT is not interested in “tolerance”. They don’t want “acceptance”. What they want is complete and total domination, which is exactly what Obama and his minions are giving them.

“Woe unto them that call evil good…”