Jimmy Carter Praises Hamas, Says Netanyahu Is Reason Why There Is No Peace 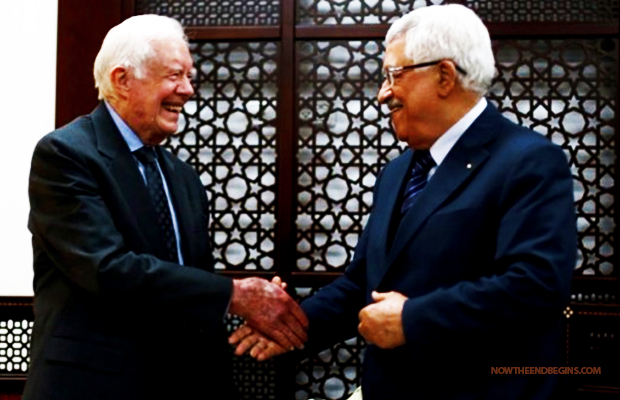 Jimmy Carter: Unlike Netanyahu, the leader of Hamas is really committed to peace

“When thou comest nigh unto a city to fight against it, then proclaim peace unto it. And if it will make no peace with thee, but will make war against thee, then thou shalt besiege it:” Deuteronomy 20:10,12 (KJV)

Former US president Jimmy Carter called Hamas leader Khaled Mashaal a strong proponent of the peace process Saturday, and said he wasn’t meeting with Prime Minister Benjamin Netanyahu because it would be “a waste of time.”

The president, who has been visiting Israel and the West Bank, met with Palestinian Authority President Mahmoud Abbas Saturday but didn’t meet with Netanyahu or President Reuven Rivlin.

He told reporters that he didn’t ask to meet with Netanyahu or his government, and never has, because it would be a “waste of time.” He told Channel 2 in an interview broadcast Saturday that he requested to meet Rivlin, but the president’s office declined.

Israel officials said last week that Netanyahu and Rivlin had refused invitations to meet with Carter, who was described by an Israeli diplomatic source as “a disaster for Israel,” who holds “anti-Israel positions.”

Carter, who cancelled a planned visit to Gaza on this trip, said Saturday he “deplored” criminal acts by members of Hamas, but said he was looking to support moderate members of the group, which he said wasn’t a terrorist organization. source