Thursday, Feb.17, the Muslim Brotherhood was allowed to take charge of opposition demonstrations in the emblematic Tahrir Square and given permission to build a platform, after the other opposition... 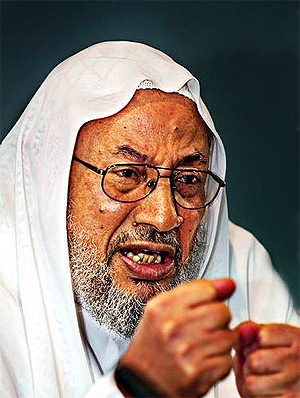 The sweet sound of freedom

For 18 days, the liberal media feed you story after story of how the “youth” of Egypt were “marching for freedom and democracy”. Never mind, of course, the fact that dozens of women were raped and sexually assaulted during this “freedom march”. Ok, so here we are a week after all the dust settled, let’s see how much “freedom” Egypt is generating.

Not only must the Egyptian people go out and conquer Al Aqsa, said Qaradawi, but Cairo must open the Egyptian-Gaza Strip border to “our brothers,” the Palestinian Hamas.

al-Qaradawi on Friday called for Muslims to "take Jerusalem", and scrap the peace treaty with Israel.

Thursday, Feb. 17, the Muslim Brotherhood was allowed to take charge of opposition demonstrations in the emblematic Tahrir Square and given permission to build a platform, after the other opposition parties and movements had been refused.
Ahead of the big event Friday night, the soldiers withdrew from the square and the Brotherhood’s strong-arm brigades move in. Opposition leaders who tried to mount the platform alongside Brotherhood speakers were thrown off and dragged out of the square without the army interfering. Debka

Iranian warships to cross Suez Canal for first time since 1979

For the first time in three decades, Iranian war ships received permission to transit the Suez Canal on their way to the Mediterranean and Syria, and return to the Red Sea and home base by the same route. The military rulers must have realized they were giving Tehran a leg up for its expansionist aspirations and strengthening the Iran-led alliance Turkey, Syria, Hizballah and Hamas. Al those allies have ports on the Mediterranean.

Just as Saudi Arabia welcomed those same Iranian war ships at Jeddah to tell the Obama administration that Riyadh was turning its face toward Tehran and away from Washington, so too is the military regime in Cairo signaling Washington and Jerusalem that Mubarak’s policy of boycotting Iran and keeping the Shiite revolutionaries of Tehran at a distance from of Egypt, Sinai and the Suez Canal is history. Debka

So there you have it – ONE week after the “freedom riots” – Jihad preached openly in the streets with calls for death to all Jews. Ah freedom, sweet freedom.