DEAL OF THE CENTURY: Jared Kushner Just Released His Middle East Plan For ‘Peace To Prosperity’ And The Saudi Kingdom Is Urging The Palestinians To Accept It, They Just Might Do It

“History and Allah brought a real opportunity,” a top-ranking Saudi diplomat told Israelis via an interview in Globes on Friday. “The blood conflict had lasted too long. Us Saudis and all Gulf States plus Egypt and Jordan realize that the age of going to war with Israel is over.”    Pointing to “the advantages of normalizing relations,” he argued that “the whole Arab world could benefit from it,” Globes reported.  The plan — formally dubbed “Peace to Prosperity” — said that the economic package, if implemented, would double the Palestinians’ gross domestic product, create more than one million jobs in the territories, reduce Palestinian unemployment.

Days before the US-sponsored Bahrain conference, Jared Kushner and the White House released its proposal to boost the Palestinian economy by offering a $50 billion aid package that can only be implemented through an Israeli-Palestinian peace agreement.

On one hand, the ‘Peace To Prosperity’ Middle East peace plan created by Jared Kushner seems to be little more than giving the Palestinians an obscene amount of money, in this case $50 billion in cash, loans, incentives including allocation to Jordan, Egypt, and Lebanon. But when I took a closer look at the mechanics of it, I saw something else lurking in the shadows that just may contain the right ingredients to push this thing through. What is that, you ask? The newly-forged alliance between the Trump White House and the Saudi Kingdom.

“And he shall confirm the covenant with many for one week: and in the midst of the week he shall cause the sacrifice and the oblation to cease, and for the overspreading of abominations he shall make it desolate, even until the consummation, and that determined shall be poured upon the desolate.” Daniel 9:27 (KJV)

Having the backing of the Saudi Kingdom is a potential game-changer in getting the Palestinians to the table. The close bond between Benjamin Netanyahu and both Jared Kushner and Donald Trump ensures that Israel is already at the table. Are all the elements in place to finally see the ‘deal of the century’ successfully consumated? We shall see, but know this. If it is, then it is not only the ‘deal of the century’, it will be the prophetic ‘deal of the millennium’ and Jared Kushner will be the Antichrist. Let’s see how far it goes, popcorn anyone?

FROM TIMES OF ISRAEL: The 40-page plan, which Senior Adviser Jared Kushner will push in Manama next week, rests on three initiatives, according to the document — to “unleash the economic potential” of the Palestinians, “empower the Palestinians to realize their ambitions,” and “enhance Palestinian governance.”

Neither Israeli officials nor Palestinians will be attending the confab. Palestinians have refused to participate, or engage at all with the Trump administration since it moved the US embassy to Jerusalem. Israeli officials and ministers were not invited, though a business delegation will be attending. A senior administration official told The Times of Israel that they wanted the focus of the gathering to be “on the economic aspect, not the political.”

Arab nations such as Egypt, Jordan, United Arab Emirates, Qatar and Saudi Arabia have all said they would participate in the conference. 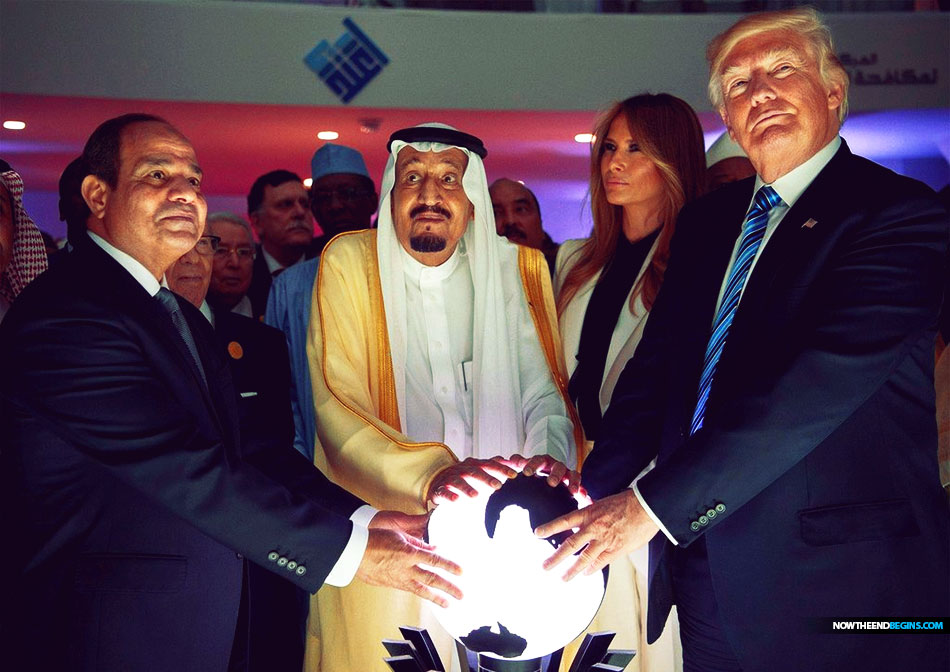 REMEMBER THIS? HAS THE NEWLY-FORMED FRIENDSHIP BETWEEN WASHINGTON AND SAUDI ARABIA BECOME THE ‘SECRET WEAPON’ IN JARED KUSHNER’S ‘PEACE TO PROSPERITY’ PLAN?

The plan — formally dubbed “Peace to Prosperity” — said that the economic package, if implemented, would double the Palestinians’ gross domestic product, create more than one million jobs in the territories, reduce Palestinian unemployment to single digits (it was 31 percent in 2018, according to the World Bank), and cut the Palestinian poverty rate by 50%. READ MORE

“History and Allah brought a real opportunity,” a top-ranking Saudi diplomat told Israelis via an interview in Globes on Friday. “The blood conflict had lasted too long. Us Saudis and all Gulf States plus Egypt and Jordan realize that the age of going to war with Israel is over.”

Pointing to “the advantages of normalizing relations,” he argued that “the whole Arab world could benefit from it,” Globes reported.

The Saudi diplomat told Globes that “Israeli technology is very advanced and the Arab world, including those who hate you, looks at Israel in admiration due to this success and hopes to copy it.”  He further stated that despite the understanding among Saudi people that the age of war with Israel needs to end, the kingdom has a deep commitment to the Palestinians.

“Maybe it is hard for them to part with the character of the ever-suffering victim and they don’t believe they could survive without it,” he said, noting that if they accept the American peace plan they will be given “sums they never dreamed of.”  The official slammed Palestinian leadership as “irresponsible” for not even considering the “Deal of the Century,” which will bring $50 billion to their people, he said.

Far from arguing the plan is based solely on money, the Saudi diplomat argued that it includes a “clear path leading to complete Palestinian independence” and added that “we are convinced that even the hard issues can be resolved when one has a full stomach and a relaxed life…they still don’t accept this.”

The diplomat argued that one of the reasons for this refusal is the Palestinian perspective that Prime Minister Benjamin Netanyahu may not be able to sell a peace deal to the Israelis and so they can wait until a leader who is more suitable to their needs might appear.

“We think that when it’s time to decide every Israeli leader, Netanyahu as well, will take the path of peace as this is what most Israelis want,” the man said. READ MORE

The Trump administration created a $50 billion Middle East economic plan. The plan calls for creating a global investment fund to lift the Palestinian and neighboring Arab state economies. Additionally, it includes the construction of a $5 billion transportation corridor to connect the West Bank and Gaza. According to Reuters, the “peace to prosperity” plan will be presented by Jared Kushner. President Donald Trump’s son-in-law will present at an international conference in Bahrain.