Japan On ‘Max Alert’ As PLUTONIUM Found In Soil

Japan said on Tuesday it is on "maximum alert" over a crippled nuclear plant where highly radioactive water has halted repair work and plutonium has been found in the... 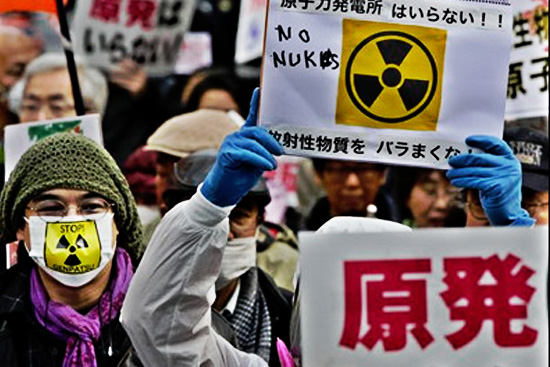 Japan said on Tuesday it is on “maximum alert” over a crippled nuclear plant where highly radioactive water has halted repair work and plutonium has been found in the soil. The earthquake and tsunami that ravaged Japan’s northeast coast and left about 28,000 dead or missing also knocked out reactor cooling systems at the Fukushima plant, which has leaked radiation into the air and sea.

Prime Minister Naoto Kan conceded the situation at the coastal atomic power station remained “unpredictable” and pledged his government would “tackle the problem while in a state of maximum alert”. In a stop-gap measure to contain the crisis at the plant, crews have poured thousands of tons of water onto reactors where fuel rods are thought to have partially melted, and topped up pools for spent fuel rods.

But the run-off of the operation has accumulated in the basements of turbine rooms connected to three reactors and filled up tunnels, making it too risky for workers to go near to repair cooling systems needed to stabilise the plant. One tunnel alone holds 6,000 cubic metres (212,000 cubic feet) of contaminated water, more than two Olympic swimming pools. Still, the only choice for now is to keep pumping water, said government spokesman Yukio Edano.

“Continuing the cooling is unavoidable… We need to prioritise injecting water,” Edano told reporters. If the rods are fully exposed to the air, they would rapidly heat up, melt down and spew out far greater plumes of radiation at the site, located about 250 kilometres (155 miles) northeast of Tokyo, nuclear experts fear.” source – Breitbart