The Russian leader Putin is reportedly mounting an enormous military mission to take control of the terror group's stronghold of Raqqa.... 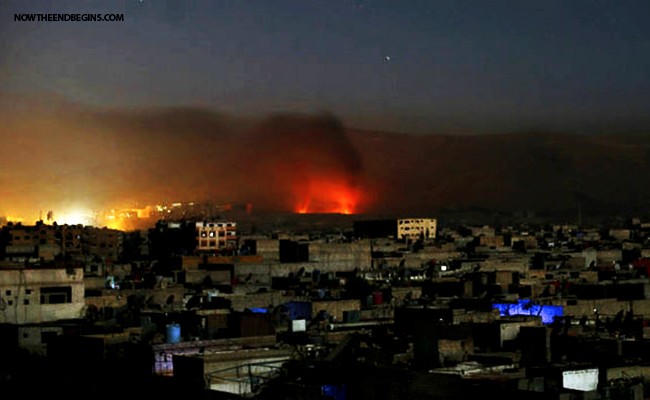 The Russian leader Putin is reportedly mounting an enormous military mission to take control of the terror group’s stronghold of Raqqa.

“And say, Thus saith the Lord GOD; Behold, I am against thee, O Gog, the chief prince of Meshech and Tubal: And I will turn thee back, and put hooks into thy jaws, and I will bring thee forth, and all thine army, horses and horsemen, all of them clothed with all sorts of armour, even a great company with bucklers and shields, all of them handling swords:” Ezekiel 38:3,4 (KJV)

EDITOR’S NOTE: While America sleeps and Obama does nothing, Putin and Russia have been a beehive of frenetic military activity. In just one week, Russia has seized control of the entire nation of Syria, partnering with Iran, and is pouring in ground troops at this very moment. Using the pretext of waging war with ISIS, Vladimir Putin is committing the perfect crime. While ostensibly taking on everyone’s mutual enemy, he is in fact creating a battlefront with Israel. You didn’t really think this had anything to do with ISIS, did you?

The city is the self-declared capital of ISIS in Syria and is patrolled by as many as 5,000 jihadi members. Putin is set to mobilise 150,000 reservists who he conscripted into the military earlier this week.

An insider revealed: “It is very clear that Russia wants to sweep up the west of the country, taking Raqqa and all the oil and gas resources around Palmyra. “This is fast becoming a race to Raqqa – to secure the oil fields they need to cleanse the region of insurgents, and the IS capital is vital to do that.”

Russian jets pounded terrorist targets and blew up a command centre, potentially killing dozens of fighters. Confirming the successful raids, Andrei Kartapolov from the Russian army vowed to ramp up the pressure, saying: “We will not only continue strikes… We will also increase their intensity.”

“A bunker-busting BETAB-500 air bomb dropped from a Sukhoi Su-34 bomber near Raqqa has eliminated the command post of one of the terror groups, together with an underground storage facility for explosives and munitions.”

“These and other highly exact means of attack in recent days have been used to target objects of Islamic State terrorists. “Command posts, stores of weapons and oil products, workshops where weapons of suicide bombers are made.”

Meanwhile a terrorism expert revealed to Express.co.uk that ISIS have vastly exaggerated their military strength and called on Western leaders to launch a co-ordinated fightback which would obliterate the hate group.

Dr Afzal Ashraf said ISIS has become its own worst enemy with its campaign of terror against the West, which has prompted an international backlash.

He said: “This mythical state will disappear in a matter of hours once the international community decides to act.

“It won’t take very long at all to drive them, if not out of all of Iraq or Syria, then certainly the majority of their territories.  “They will hide in towns, but I would say do not to follow them as they would use innocent civilians as human shields.”

David Cameron initially gave the Russian air strikes a cautious welcome and said the UK would need to look “very carefully” at Putin’s operations. But yesterday he warned the intervention is making the situation worse and helping to support the “butcher” president Bashar Assad.

Seperately Mr Cameron pledged to “beef up” the SAS and double the number of British drones to combat ISIS militants in an interview ahead of today’s Conservative conference. The Prime Minister said investment in special forces and surveillance was essential to meeting the terrorist threat facing the UK.

He revealed that the UK will buy a fleet of 20 new Protector drones capable of targeting IS extremists in Iraq and Syria. source