IT BEGINS: US Marine Court-Martialed For Refusing To Remove Bible Verse From Computer

A United States Marine was convicted at a court-martial for refusing to remove a Bible verse on her computer – a verse of Scripture the military determined “could easily... 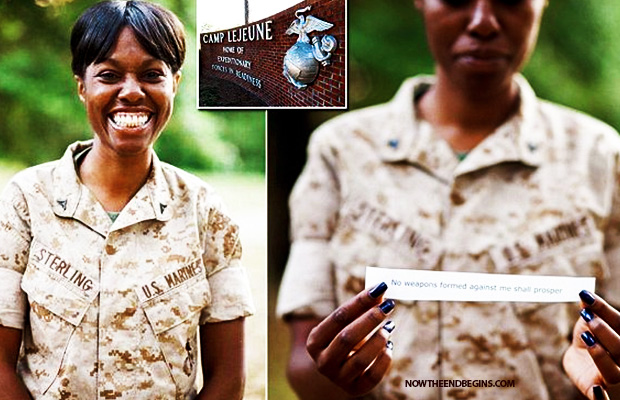 The plight of Lance Corporal Monifa Sterling seems unbelievable, but it’s disgustingly all too real

“No weapon that is formed against thee shall prosper; and every tongue that shall rise against thee in judgment thou shalt condemn. This is the heritage of the servants of the LORD, and their righteousness is of me, saith the LORD.” Isaiah 54:17 (KJV)

They say that if you put a frog into boiling water, it will jump out. But if you put the same frog in cold water and gradually turn up the heat, it will never jump out until it’s too late, and get cooked. That’s exactly how the Obama administration is removing our freedoms, one at a time. And he has been astonishing successful. America in 2015 is a place Jesus Christ and the Bible are considered hate speech, and the LGBT Agenda is glorified. A place where everyone has rights except the bible believing Christian, run by an administration that allows Iran to have nuclear weapons but posting a Bible verse to your personal computer is illegal.

America, the wolf is in the White House and you are losing the battle for your liberty. It’s time to wake up, or admit defeat.

A United States Marine was convicted at a court-martial for refusing to remove a Bible verse on her computer – a verse of Scripture the military determined “could easily be seen as contrary to good order and discipline.”

The plight of Lance Corporal Monifa Sterling seems unbelievable – a member of the Armed Forces criminally prosecuted for displaying a slightly altered passage of Scripture from the Old Testament: “No weapon formed against me shall prosper.”

Sterling, who represented herself at trial, was convicted February 1, 2014 in a court-martial at Camp Lejune, North Carolina after she refused to obey orders from a staff sergeant to remove the Bible verses from her desk.

Both lower court and the appellate court ruled that the Religious Freedom Restoration Act did not apply to her case because displaying a Bible verse does not constitute religious exercise.

However, a religious liberty law firm and a high-powered, former U.S. solicitor general have taken up her case and have filed an appeal to the U.S. Court of Appeals for the Armed Forces.

“If the government can order a Marine not to display a Bible verse, they could try and order her not to get a religious tattoo, or go to church on Sunday,” said Liberty Institute attorney Michael Berry. “Restricting a Marine’s free exercise of religion is blatantly unconstitutional.”

Sterling wised up and finally got legal counsel. Now representing her are the Liberty Institute along with former U.S. Solicitor General Paul Clement, also a law professor at Georgetown University. Clement most recently won a Supreme Court victory on behalf of Hobby Lobby against the Affordable Care Act.

Ronald Reagan Warned Us On The Gradual Creep Of Socialism:

Liberty Institute and Clement plan to argue that the appellate court should have applied the Religious Freedom Restoration Act in Sterling’s case – protecting her right to post Bible verses as a form of religious exercise.

According to the appellate court’s decision, they were not convinced “that displaying religious text at a shared government workstation would be protected even in a civilian federal workplace.” They also considered the fact that Sterling’s desk was shared by other Marines.

“The implication is clear – the junior Marine sharing the desk and the other Marines coming to the desk for assistance would be exposed to biblical quotations in the military workplace,” the court declared. “It is not hard to imagine the divisive impact to good order and discipline that may result when a service member is compelled to work at a government desk festooned with religious quotations.”

Attorney Berry points out that other Marines were allowed to decorate their desks. However, the lower courts refused to allow that evidence to be admitted. And at the time of the incident – Sterling was not sharing a desk.

“This was a conflict between her and her supervisor,” he told me. “Her supervisor clearly said she did not like the tone of the Bible verses.”

Berry said the supervisor cursed at Sterling and ordered her to immediately remove the verses. She refused the order. The following day, she discovered the verses had been removed and thrown in the trash.

“Adding insult to injury, the government charged her with the crime of failing to obey a direct order because she did not remove the Bible verse,” Berry said.

According to court documents, the military maintains the “verbiage” – “No weapon formed against me shall prosper” could “easily been seen as contrary to good order and discipline.”

“Maintaining discipline and morale in the military work center could very well require that the work center remain relatively free of divisive or contentious issues such as personal beliefs, religion, politics, etc.”

Liberty Institute attorney Hiram Sasser told me it was outrageous “that such a small strip of paper could so frighten a drill sergeant.”

“This is a very scary time when you are not allowed to have a very small printed Bible verse in your own personal workspace because it might offend other Marines,” Sasser told me. “Our Marines are trained to deal with some of the most hostile people on the planet. I don’t think they are afraid of tiny words on a tiny piece of paper.”

Reagan Warned Us About Obama, We Didn’t Listen:

The Bible verse incident happened in May 2013. A few months later she was accused of failing to wear an appropriate uniform because of a medical condition. Berry told me he believes the military was trumping up the charge sheet “to make it look that things were worse than they were.”

As it now stands – Sterling is unemployed and looking for work. It’s a process made harder because of the bad conduct discharge from the military.

Hopefully Liberty Institute will be able to restore this Christian Marine’s good name and expunge the charge. Anything less could jeopardize the standing of every person of faith serving in the Armed Forces. Should that happen – God help us all. source

“Freedom is never more than one generation away from extinction. We didn’t pass it to our children in the bloodstream. It must be fought for, protected, and handed on for them to do the same, or one day we will spend our sunset years telling our children and our children’s children what it was once like in the United States where men were free.” – Ronald Reagan, January 5, 1967