Obama is the new Jimmy Carter. Gasoline station owners in the LA area are beginning to shut pumps as the state’s oil refiners started rationing supplies and spot prices... 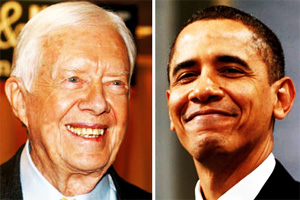 It's amazing how history seems to repeat itself...
by Geoffrey Grider October 5, 2012
NOW THE END BEGINS SHARE:

Gasoline station owners in the Los Angeles area including Costco Wholesale Corp. (COST) are beginning to shut pumps as the state’s oil refiners started rationing supplies and spot prices surged to a record.

RELATED STORY: The 1979 Hostage and Oil Crisis Under Jimmy Carter

It’s amazing how history seems to repeat itself…

The gasoline shortage “feels like a hurricane to me, but it’s the West Coast,” Jeff Cole, Costco’s vice president of gasoline, said by telephone yesterday. “We’re obviously extremely disheartened that we are unable to do this, and we’re pulling fuel from all corners of California to fix this.”

Spot gasoline in Los Angeles has surged $1 a gallon this week to a record $1.45 a gallon premium versus gasoline futures traded on the New York Mercantile Exchange, data compiled by Bloomberg show. That’s the highest level for the fuel since at least November 2007, when Bloomberg began publishing prices there. On an outright basis, the fuel has jumped to $4.3929 a gallon. source – Bloomberg