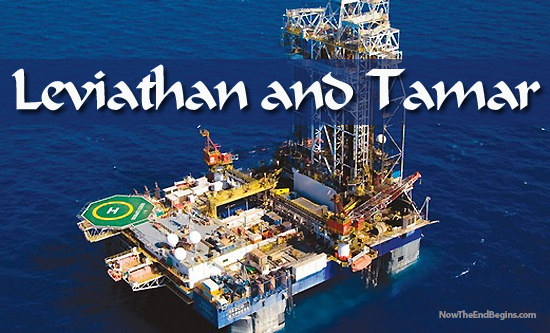 This presents a very tempting target for the the enemies of Israel to come and try to take it.
by Geoffrey Grider March 13, 2012
NOW THE END BEGINS SHARE:

Sitting on a gold mine

The bible says that in the end of time, a multi-nation force will gather against Israel. Ezekiel 38 says that these nations include Russia, Iran, Ethiopia, Libya and others. The reason why they come against Israel is to plunder their wealth, to “take a spoil” as you can see in the verses below. Now it has been discovered that Israel is sitting on top of 123,000,000,000,000 cubic feet of natural gas which translates to about 20,000,000,000 barrels of oil. That’s a lot of spoil in anyone’s book. The prophet Ezekiel is right on the money…

“Thus saith the Lord GOD; It shall also come to pass, that at the same time shall things come into thy mind, and thou shalt think an evil thought: And thou shalt say, I will go up to the land of unwalled villages; I will go to them that are at rest, that dwell safely, all of them dwelling without walls, and having neither bars nor gates, To take a spoil, and to take a prey; to turn thine hand upon the desolate places that are now inhabited, and upon the people that are gathered out of the nations, which have gotten cattle and goods, that dwell in the midst of the land.” Ezekiel 38

From Fox News: There is another revolution in the Mideast, presently underway, that is not being televised. It centers on the all-important area of energy production, and it might be called, “the Battle for Leviathan.”

This presents a very tempting target for the the enemies of Israel to come and try to take it.

At issue is the recent discovery of huge untapped natural gas fields in the Levant Basin, the section of the eastern Mediterranean Sea that abuts Israel to the East, and Cyprus to the North.

Through “exclusive economic zones” finalized under prevailing laws of the sea, Israel and Cyprus have laid internationally recognized claims to these fields, which analysts suggest could be worth $130 billion to the Israeli economy.

This is why in February, Benjamin Netanyahu became the first Israeli prime minister ever to visit Cyprus, and why the two nations have inked a number of unprecedented pacts with each other.

Led by Texas-based Noble Energy, the Israelis have already identified two gas fields south of Cyprus, code-named “Leviathan” and “Tamar,” that offer a combined 24 trillion cubic feet of recoverable gas. Talks are underway between Jerusalem and Nicosia to build underwater pipelines, refineries, air bases, and other critical infrastructure to facilitate — and protect — these ventures.

If successful, they could serve not only to make the Jewish state energy-independent but allow it to become an energy exporter.

This, in turn, would give Jerusalem increased clout over energy-hungry states like India and China. The latter, in particular, has repeatedly voted on the U.N. Security Council to protect Iran; but Beijing may be persuaded to abandon that stance if Israel becomes a significant supplier of Chinese gas imports.

Turkey, which has historically clashed with Cyprus and has feuded with Jerusalem in recent years, has deployed warships to protect what it sees as its interests in the underwater gas fields; and Lebanon, backed by the terrorist group Hezbollah, has warned that the U.S. and Israel will not be permitted to “plunder” natural resources that Beirut, too, claims as its own.

Finally, both Iran and Russia – which has surged over the last decade to become the world’s leading exporter of natural gas – have also taken note of the potential geopolitical shifts that these gas discoveries could bring about. It is, in short, a situation rife with both economic promise and the potential for military peril.

“Iran, of course, as Israel’s implacable foe, will do all it can do to thwart any activity that allows Israel to become more secure, more prosperous, or remain viable as a sovereign state,” John Sitilides, a State Department advisor and lobbyist based in Washington, said.

“And so we might see Iran, operating through proxies such as Hezbollah in Lebanon or Hamas in the Palestinian Authority’s Gaza Strip, [act] to deny Israel and Cyprus the ability to get that natural gas to market,” he added.

While the U.S. generally sees Israeli energy independence as a desirable development for American security interests, the Obama administration has urged that Cyprus and Turkey initiate a “de-escalation of rhetoric and tension” to arrive at a resolution of the differing claims to the gas fields.

At a briefing last September, State Department spokeswoman Victoria Nuland called for the two countries, perhaps with the assistance of the United Nations, to develop “some sort of mediation on a revenue-sharing agreement for natural gas developed off of Cyprus.” source – Fox News